The combination of analytics and video is helping coaches to hone player performance and the sport is keen to push innovative use of technology in all areas of the game.
Written by Mark Samuels on Nov. 20, 2019 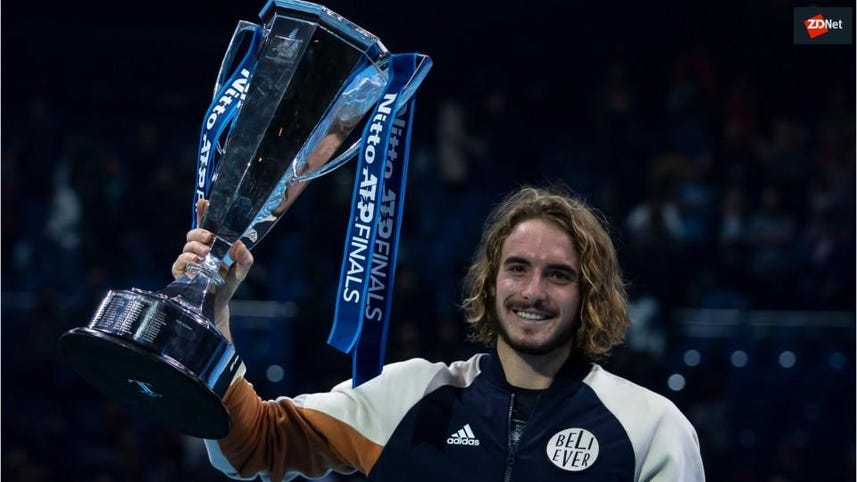 Big data is changing how tennis stars train and play; but the key to success is taking all that information and turning it into something players can use to win.

Craig O'Shannessy, official strategy analyst for both the ATP Tour and all-time great Novak Djokovic, says that the smart use of data when preparing can have a significant impact on a match.

O'Shannessy explains to ZDNet at the ATP Tour Finals in London how he uses a range of tools to give Djokovic that data-led advantage. These tools include the Infosys Tennis Platform, which is being used for the first time in 2019 across the ATP Tour, which is the worldwide top-tier tennis tour for men organised by the Association of Tennis Professionals.

The platform includes a portal that gives players and coaches access to advanced analytics and match video. This portal uses artificial intelligence and machine learning to match big data with video of game-changing points. Players and coaches have access to more than 100 filters in over 1,000 combinations to analyse performance, and the potential strengths and weaknesses of opponents.

O'Shannessy says the ability to use a data-led portal to create a custom playlist of video clips is "a very big deal". Being able to easily and quickly highlight the key points in as little as 20 minutes after a match is a potential competitive differentiator.

"When I first started working with Novak, at the 2017 Australian Open, I sat down with him and said, 'Listen, I do a lot of different things, how can I best help you?' The first thing he pointed to was video, the ability to see himself play and the ability to see the best patterns of play," he says.

O'Shannessy also uses tools from Tennis Analytics, a big-data specialist that provides match and technical analysis services to top professionals. He says the smart use of video and analytics technology from a coaching perspective is all about distilling information.

"The worst thing that I could do is show Novak the match chronologically – that's not the way to do it in today's game," he says. "Success is about taking big data and simplifying it and distilling it, so that a player can use it under five minutes with you – whether it's the video, the numbers or the data tables. It's about finding the 10 or 15 points that matter the most and explaining that these are the patterns of play that that you want to repeat in upcoming games to win those matches."

O'Shannessy paints a picture of a sport that is using as much data as possible to help hone player performance. He says the use of technology within tennis has become more entrenched during the past three decades – and he expects the sport to pioneer more data-led developments in the future.

"We need to remember where our sport has come from in order to know also where it's going to," he says. "Before 1991, we weren't counting anything – we didn't have analytics. Now, I can use technology to focus on player performance. I want to put numbers to everything and that's the route that I want the technology to continue to take."

Smart preparation starts a long way from the tennis court. "Every guy that Novak plays, I have video and analytics on, so there are no more surprises coming from the other side of the court," he says. "So, is it worth one point a match? Absolutely. Is it worth two? For sure it's worth two points. I'd say in a three-set match, it's worth more in the range of five to 10 points."

Other experts also note the willingness of tennis to embrace technology. Chris Brauer, director of innovation in the Institute of Management Studies at Goldsmiths, University of London, says that, while a common theme in his research is a lack of consensus when it comes to change, he says the people running tennis – such as O'Shannessy – are open to innovation.

"He's able to ask the question of the system and create a set of insights that allows him to be clear about the reality of what's actually happening on court," he says. "That's the difference between a data-driven insight approach to tennis and one that's based exclusively on intuition or experience – which is hugely valuable, but which on its own can lead us as human beings towards a lot of false positives."

ATP umpire Ali Nili is another senior figure in the game who believes tennis has taken a pioneering approach to technology. He gives the example of the early implementation of live, online scoring in the sport. Nili also refers to the introduction Hawk-Eye technology 15 years ago, which provides automated line-calling assistance to umpires.

While other high-profile sports like football have been slow to use similar systems, tennis has been one of the trailblazing adopters. The more recent and heavy use of data and video to help coaches hone player performance is just the latest in a long line of innovations.

"You see that a lot of major sports are now just trying to adopt Hawk-Eye and use technology," says Nili. "We've been good at that and we hopefully continue to be good at exploring innovations and trying things."

The experts at the ATP Tour Finals event in London suggested the next area of development in tennis is likely to focus on connectivity, particularly in terms of IoT sensors on balls and on players. These sensors would provide even more data to players, coaches and other potentially interested parties, including broadcasters and fans.

Some sports are already pioneering developments in this area, including golf's European Tour, as ZDNet found out recently. So, for once, tennis might have to play catch-up when it comes to introducing new technology. However, the sport's history of innovation leaves Goldsmith's Brauer thinking that the future of tennis will be closely intertwined with innovation.

"Hardly a day goes by when a new technology isn't being released that helps to inform this process," he says. "The coaches and the community of players and stakeholders at the highest levels of the game are entirely engaged. As a result, the game has already been fundamentally transformed by the opportunities that insight and analytics provides – and there's more to come."