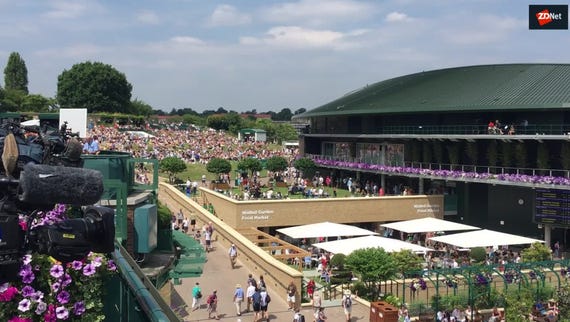 While spectators eat strawberries and players hit shots, a dedicated team of IT professionals work behind the scenes at Wimbledon to ensure the technology that underlies the world-famous tennis tournament is a cross-court winner.

Simon Boyden, chief architect for IBM at Wimbledon, took ZDNet on a behind-the-scenes 'bunker tour' of the technology in play during The Championships. Housed in Wimbledon's media centre, the bunker is home for two weeks to a group of IBM data and infrastructure specialists who deliver IT operations and digital platforms.

In the operations room professionals monitor banks of screens to confirm systems are running effectively. "Generally, the work that takes place in here is all about data," says Boyden. "The core of our operation is statistics."

The operations centre receives a constant drip feed of data from 48 up-and-coming tennis players who sit court-side and record details from matches, such as serves, returns and points in a rally. IBM uses club-standard players to record data as they understand subtle nuances in the game, such as the difference between a forced and unforced error.

"A lot of the data that we take gets fed through to the broadcasters and they need stats straightaway. There's about 3,500 accredited members of the press on site. And we also provide video of all the points that have played 30 minutes after the match, to both the media and the players, through a dedicated portal."

Boyden demonstrates how media professionals and tennis players can dip into the system and trace historical data back to the 1870s. A supporting data-science team provides reactive answers to press questions. The team also works proactively, searching the system for facts that can enliven commentators' delivery.

IBM also feeds data to SlamTracker, an analytics technology that draws detailed information from WIS and provides in-match statistics in a consumer-friendly way to spectators. SlamTracker is housed on the Wimbledon website and provides a graphical representation of the match, suggesting how it has evolved and what the result might be.

Operational activities are not the only focus of the IBM team at Wimbledon. Boyden takes us to the second room of the bunker which is split between infrastructure support, such as cloud hosting and cyber security, and development activity, including artificial intelligence (AI).

He says Wimbledon faces an "almost-unique challenge" -- its web site receives low traffic for 50 weeks a year and exponential growth for the two weeks of The Championships. Boyden's team uses IBM cloud-hosting capabilities to dynamically meet that demand. Content is served from four sites -- San Jose, Montreal, Tokyo and London -- to provide resiliency and to increase the speed of delivery.

Software development for The Championships take place on this secure cloud platform. Boyden says this development activity is a constant work in progress, with The All England Lawn Tennis Club -- which controls the day-to-day operations of The Championships -- eager to find new ways to serve content to its global audience.

"Wimbledon has realised that the amount of people who take their information from web sites is large but relatively static, whereas a social platform like Facebook is where people are increasingly going to get their updates," he says. "So, one of the things we've built this year is a bot for Facebook Messenger."

Wimbledon Messenger, powered by Watson Assistant capability, is a social assistant that allows the public -- both spectators at the club and supporters around the world - to ask questions and receive automated responses. As well as subscribing to feeds on favourite players, fans call also make general queries. Boyden gives the example of a spectator asking for the best place to buy strawberries at Wimbledon.

"It provides information for people at the ground and for those who are out and about," he says. "The nature of Facebook Messenger is such that, once people subscribe to certain feeds, they get alerts that come through proactively. The bot also has a level of depth."

However, the challenge of using AI-powered technology -- as other IT leaders can testify -- is that the bots need to hone their performance. While developers can try their best to beta test a platform before launch, there's nothing quite like a real-time environment.

"The issue with a two-week event like Wimbledon is that we have to train the system as we go along," says Boyden. "We're finding the technology is getting better and better as it receives more queries from people. It understands, for example, that when you're asking about players, that's that same thing as the stars who are playing at Wimbledon."

Most of the team managing the Watson-powered technology during Wimbledon are usually based in the United States. This team spends a great proportion of its time on the road, managing systems at other sporting events, such as the Masters in golf, and entertainment extravaganzas, like the Golden Globes.

"We've taken all the data and statistics from the WIS and we've pushed that together with triggers, like the crowd cheering or a player getting excited, to highlight key points in the match," he says.

"By teaching Watson about game-changing moments, we can use cognitive computing to push out edited two-minute video packages minutes after a match has finished. You must be able to tell a story -- so it's no good producing a video when a player wins and all Watson picks up are exciting moments where they lost points."

The good news is AI is learning on-the-job -- and helping Wimbledon and accredited media organisation to access high-quality highlights quickly. Boyden says the success of the system has not resulted in the culling of human video editors.

"The technology allows Wimbledon to do more video -- it's very much a tool that the editors can use and pick up," he says. "By improving how tight we are with clipping, we can get out more highlight packages quickly. We're now at a point where the whole automated process takes about five minutes." 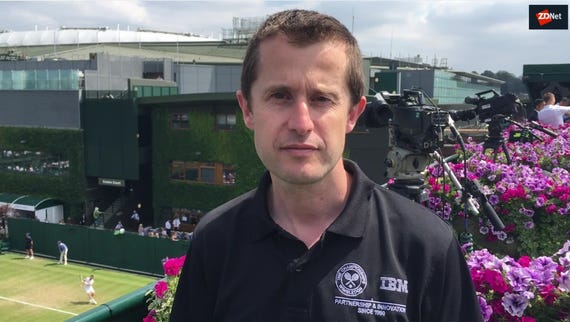 MORE ON TECH IN SPORT

How professional cycling is being taken up a gear by technology

Trek-Segafredo is using technology to change how the team operates. Here's how.

Suning also announced a partnership with Baidu Apollo to work towards mass production of unmanned delivery vehicles as early as 2020.

Czech VR firm is bringing sports bootcamp to the masses

Among the VR standouts at CES 2018, this company is bringing advanced athletic training to the masses.

World Cup spectators may be exposed to Russian hackers (TechRepublic)

Like all major sporting and entertainment events, World Cup fans in Russia will be exposed to phishing, password crackers, stingrays and other cyber-attacks.

The FitBit-ization of VR and the future of youth sports

Among the VR standouts at CES 2018, this company is bringing advanced athletic training to the masses.

The Brazilian star responds to criticisms about his dramatic roll on the pitch after a Mexican player stepped on his foot.

Join Discussion for: Wimbledon: How AI, chatbots and big data...