The rumor that Apple is considering replacing Google with Bing on the iPhone signals that the relationship between the two companies has gone ice cold. Now they're just fierce competitors.
Written by Jason D. O'Grady, Contributor on Jan. 21, 2010 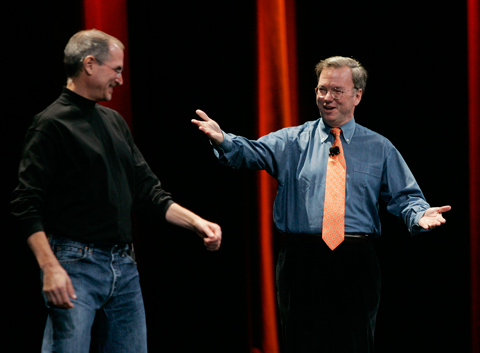 Yesterday BusinessWeek dropped a bomb about how Apple is considering replacing Google with Microsoft's Bing as the default search engine on the iPhone.

Not only would this take away lucrative advertising revenue from Google, it's a slap in the face of a former partner that helped launch the iPhone with the original Google Maps for mobile.

If true the move would reflect how much the Apple/Google relationship has chilled since Eric Schmidt resigned from the Apple board in August 2009 and Google released Android 2.0 in November 2009.

Update: Another undoubted reason for the chill is Apple's removal of all Google Voice-based apps from the App Store in July 2009. Apple's asking Google to release Latitude as a Web app (as opposed to a native app) probably didn't help matters much either.

Exhibit A: Maps has languished on the iPhone, barely getting updates, while Google Maps Navigation (for Android-only, natch) is disruptive app that has the potential to replace millions on GPS receivers on dashboards across the country. Yes, it's that good.

Exhibit B: The Bing app (App Store, free) has replace Google Mobile on my iPhone, because its a better app. It has voice searching for maps for example, a feature that's missing in Google Mobile.

Exhibit C: Google Goggles, which allows you to use pictures taken by your phone to search the Web, is also Android-only. And it rocks.

If Apple drops Google as the default search on the iPhone you can probably expect apps like Google Maps Navigation and Goggles to remain Android-only and for iPhone apps like Google Mobile and Google Earth to stagnate while they're actively updated for Android.

I don't think that Google cares one lick about Apple and its iPhone. It's got Android 2 and the Nexus One laser focused on the iPhone and will stop at nothing to supplant it at the top of the heap.

What exactly did Schmidt do while he was on the Apple board anyway? Get a bunch of good ideas?

When is the other shoe going to drop? Can we expect Bing to replace Google on the desktop version of Safari too?

Update 2: Google’s YouTube has begun renting movies through its Web site and will soon be competing with the iTunes store.