Could a "super-hydrophobic" plant help the shipping industry leave less of a carbon footprint in its wake? German material scientists think so.
Written by Melissa Mahony, Contributor on May 5, 2010 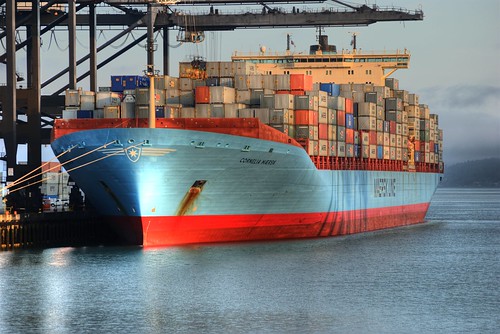 When it comes to sea travel, the ocean has a lot of drag. The heavier and bigger the boat, the more propulsion energy lost to friction between the vessel's hull and sea.

No surprise, the container ships issuing about 90 percent of global trade from port to port are huge fuel guzzlers.

Researchers at the University of Bonn, however, are hoping a plant can show these ships the way to a slicker surface. They have discovered how the water fern (salvinia molesta) repels water so superbly that it never really gets wet. When placed underwater, this plant's tiny hair-like structures create "a gauzy skirt of air" that separates the fern from the surrounding liquid. Synthetic surfaces that are super-hydrophobic already exist, but their ability to repel water is relatively short-lived within water that is moving. According to researchers, those materials could only maintain their air pockets for a matter of hours.

The water fern is different.

In their study published in Advanced Materials, the authors found that the very tips of the fern's whiskers are actually hydrophilic, meaning they attract water. As the hair ends dive into water, they essentially pin the liquid away from the rest of the plant at regular intervals. The layer of air is then trapped.

Professor Thomas Schimmel of the University of Karlsruhe says in a statement:

After the solving of the self-cleansing of the lotus leaf twenty years ago, the discovery of the salvinia effect is one of the most important new discoveries in bionics.

The shipping industry emitted 847 million tons of carbon dioxide in 2007. The amount was almost 3 percent of human-made CO2 emissions that year, according to the International Maritime Organization.

The study suggests a water-fern-like coating on the hull of a container ship could decrease its fuel consumption by 10 percent.

Other uses for the fern's hydrophobic qualities could be low-friction, quick-drying swimsuits (take note, Michael Phelps).