The number of apps submitted to the BlackBerry 10 App World store grew by 15,000 over the weekend, following an online community 'port-a-thon' designed to encourage developers to make their apps compatible with the upcoming BlackBerry 10 platform. 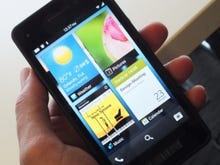 The event, which overran slightly, began on Friday and was scheduled to run for 36 hours.

"Well there you have it. 37.5 hours in, we hit 15,000 apps for this port-a-thon. Feel like I've run a marathon. Thanks to all the devs," Alec Saunders, vice president of developer relations for Research In Motion (RIM), wrote on Twitter on Saturday.

RIM is keen to entice developers to build for its new platform as it knows a healthy app ecosystem will be crucial to the success of the new handsets and OS.

To provide an extra incentive, developers who took part in the 'porting party' could earn, or win, a range of rewards. For example, RIM was paying $100 per eligible app that developers had approved (up to a maximum of 20).

The more apps developers submitted and had approved, the better the incentives became, with some winning trips to RIM's BlackBerry Jam Europe developer event being held in Amsterdam in February.

In December,  RIM's BlackBerry 10 software development kit (SDK) went gold , marking its move into the final build, including tools and APIs for developing for the platform.

The launch of BlackBerry 10 is scheduled for 30 January, at which point the world will get its first official glimpse of the new BlackBerry handsets.