The reaction to BlackBerry CEO Thorsten Heins' comments about the future of tablets is unanimous: Most folks think Heins is way off. Perhaps it's worth pondering whether he's right to some degree.

Before you laugh at Heins note the direct quote via a Bloomberg interview:

In five years I don’t think there’ll be a reason to have a tablet anymore. Maybe a big screen in your workspace, but not a tablet as such. Tablets themselves are not a good business model.

Heins is basically saying that BlackBerry can't make money on tablets. In fact, it's unclear anyone beyond Apple can make money on tablets. The Android tablet race is headed to a commodity hardware market. There's just no room for BlackBerry. The leap Heins is taking is that tablets are a transition device and may suffer the same fate as netbooks in five years.

Today, it's hard to see how Heins' take can be on target. Tablets are flying off the shelves and poaching PC sales. Tablets must be the future right? 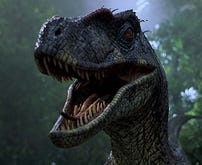 'Jurassic Park' Proves That The PC Won't Die In an "adapt or perish" world, the ever-evolving PC will still be the right tool for the right job, even if it lives alongside numerous other species of computing devices.

Not necessarily. It's possible that tablets are a step to another computing standard. Perhaps a hybrid device works. Perhaps there's some fold-up gadget that fits everyone's needs. Perhaps the smartphone is the real computing hub aided with virtual keyboards, docking stations and other items. Perhaps Google Glass steals some tablet thunder.

The reality is that we're lugging around more devices not less. Backpacks are typically filled with laptops, tablets and smartphones. There's an opportunity to collapse those categories.

In other words, laugh off Heins today. His tablet comments are obviously viewed through BlackBerry's PlayBook scarred lens. But it's worth pondering whether he has a point and in what conditions.