Full Bio
Posted in Between the Lines on September 2, 2014 | Topic: BlackBerry

Get ready to meet BlackBerry's Passport.

The Waterloo, Ontario company on Tuesday announced a media event, pegged for September 24, where the smartphone maker will unveil its latest and greatest smartphone.

There will be three events held in tandem in Toronto, London, and Dubai.

"In September, we will host an event to showcase our device portfolio for the [fiscal year 2015]. We're launching a brand-new device called Passport in September in London. Most of the information has been leaked to website, so you guys should go ahead and check that out. This will follow by the Classic coming out in November."

Because so much has leaked already and paraded in front of select members of the media, perhaps all there's left to unveil is the price point of the square-like device. 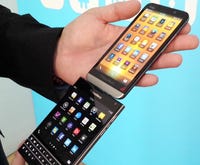 ZDNet's Larry Dignan saw the device earlier this year, where he described it as "crazy enough to work."

Although the block-square design may feel disjointed from the vast array of slim and curvy devices on the market, he said it fits squarely in your pocket. The build quality was said to be "solid."

Although the US domestic market may be cynical of the company's new smartphone, Dignan noted that users in Asia and Europe — two regions where people are more at home with larger devices — could succeed.

The company's efforts into the enterprise-focused mobile device management sphere has been so far lauded, considering it has a less than one percent market share globally  in its smartphone division.

For the former crown jewel in the smartphone market, it's feast or famine.