NEW YORK -- If only it wasn't called the "Priv," BlackBerry's Android phone wouldn't get me so wound up.

BlackBerry's latest phone, an Android device, centers around two principles: "privilege" and "privacy," which flat out makes no sense, except for the fact that according to Dictionary.com those are the first two words that start with "priv."

Privacy is tricky to protect, but it's surprisingly easy to understand. Your privacy can relate to anything from your music and movie tastes, your text messages with that person you really like, or something as personal as your religion, beliefs, or views. It can also relate to where you are, who you talk to, your private information -- such as a contacts list or your documents and photos. Privacy only really exists when you have control over it. You put a passcode on your phone to prevent someone else from accessing your private information.

Once you give up that control, you may no longer have privacy.

Privacy relies on the protection of your data. After spending a week with the Priv, I can tell you from the three most used apps on this phone:

That's not privacy-enhancing data. That's just information, which I can't do anything about.

As I said in my review: "The police turning up at your door saying you got burgled isn't effective law enforcement. It's stating a fact, and hoping you feel reassured by it." 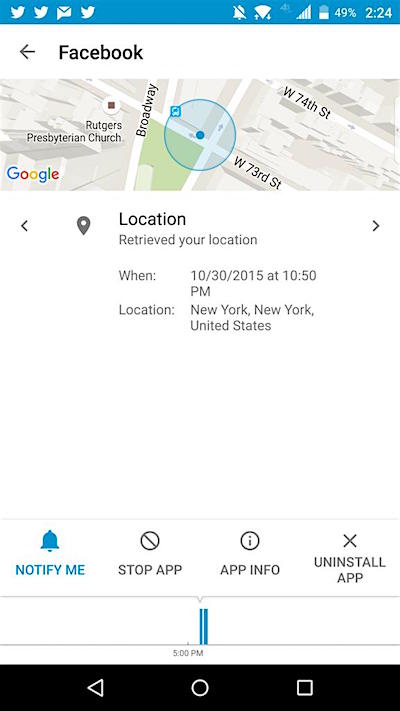 That data came from a in-built app called DTEC, which measures the health of your Priv smartphone, based on whether you have a strong lock code, device data encryption, and have certain options on and off, depending on the preference.

In short, it's a weak privacy app. It doesn't prevent your data from being slurped up by the various apps you use, nor does it give you an option to do much about it -- except uninstall the apps. And let's face it, nobody is going to uninstall Facebook.

BlackBerry clearly went in with the best of intentions for this device. For the fact that you've got phone developers thinking about privacy is a rare sight in this day and age, of data breaches, hacks and government surveillance. The problem is, you can't half-ass privacy and security. One trip in the system and you can bring the whole veil of protection down.

But marketing this phone as a privacy phone is borderline dangerous for those who think, perhaps naively, that this phone will protect their privacy.

The Blackphone 2, another Android-based phone which we reviewed earlier this year, actively mitigates apps and services from grabbing a user's data. iPhones have also become increasingly privacy-centric and security focused by adding device encryption, among other things.

This is a good phone for Android users, and it's a great phone for BlackBerry loyalists. It's a smart, usable, accessible and customizable device with a hardware keyboard that all too many people have missed over the years.

And there are some positive security-focused additions to the software, including kernel hardening, adding hardware root-of-trust to prevent rootkit malware and device tampering, and also over-the-air security hotfix patches that can override the carrier's approval for those (all too often) Android security emergencies.

Call it anything, but don't call it a privacy phone.

Hands-on with the BlackBerry Priv: in pictures SEE FULL GALLERY

Join Discussion for: BlackBerry Priv has a big flaw: It's a privacy...