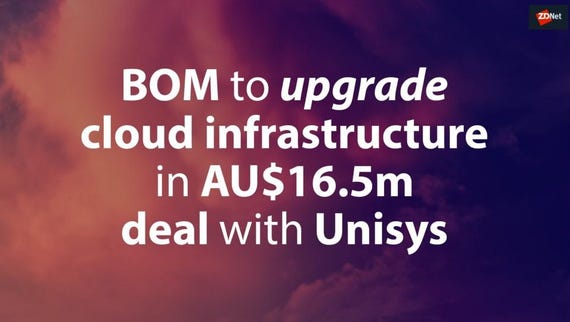 "Unisys has a wealth of experience helping government organisations transform their environments to provide better, more efficient and secure services using digital technologies, including the public cloud," he said.

"In addition, we bring specific weather expertise from more than 30 years providing reliable and timely weather data and products in the US, including to the National Oceanic and Atmospheric Administration. We look forward to helping the Bureau of Meteorology provide its critical weather services to Australians to keep them informed and arm them with the best information to make safe and informed decisions."

Under the contract, which was awarded in Q2 of 2019, Unisys will have the option for multiple extensions with a total maximum term of no more than nine years.

The new infrastructure follows a spate of security-related incidents that BOM has had to face in the last few years.

The most recent incident saw a 33-year-old man arrested and charged by the Australian Federal Police (AFP) for allegedly manipulating the computer programs at the BOM to mine cryptocurrency while being employed as a government IT contractor.

The BOM CEO and director of meteorology Dr Andrew Johnson also confirmed during Senate Estimates last May that the bureau had suspended a third-party for serving up "fake news" advertising material on its website that was connected to bitcoin-based scams.

Back in 2015, BOM was also caught up in a major cybersecurity incident, even though the BOM claimed at the time that no sensitive data was taken during the incident.

The BOM was called out earlier this year for having one of 14 government IT projects that the Digital Transformation Agency is watching closely. The BOM project that was named was ROBUST.

The DTA said it has engaged with ROBUST given the large budget, complexity, multi-year timeframe of the project, as well as its cybersecurity risks.

Join Discussion for: BoM to upgrade cloud infrastructure in AU$16.5m...