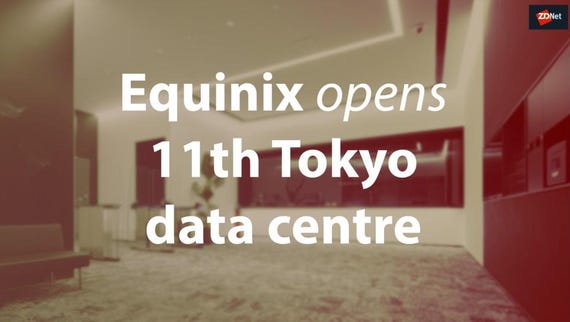 Equinix has opened its 11th data centre in Tokyo where it is looking to tap Japan's growing cloud adoption and digital transformation drive. Currently boasting a capacity of 950 cabinets and colocation space of 39,800 square feet, the facility is expected to expand to more than 3,500 cabinets and 153,800 square feet when it is fully completed.

Called TY11, the latest site was part of the company's efforts to grow its global footprint, Equinix said in a statement Tuesday. Costing US$70 million in this initial phase, the data centre would become the vendor's largest such facility in Japan when fully completed, though, it did not provide a timeline on when this would be.

It noted that Tokyo was the largest retail colocation market by revenue, ahead of cities such as London and New York. In fact, Japan was projected to become of the largest public cloud markets this year, with cloud spend tipping at US$7.4 billion, Equinix said, citing figures from Synergy Research Group and IDC.

The data centre vendor also runs another two facilities in Osaka, rounding up its overall Japan network to 13.

It noted that Japan was seeing growing cloud adoption and digital transformation, and also was looking to technologies such as artificial intelligence and more robust network connectivity in the lead up to the Tokyo 2020 Olympic Games as well as the country's 5G services rollout.

Located in the Koto district of Ariake, which was close to venues in the upcoming Olympic Games, Equinix said TY11 was built with various anti-disaster measures and "earthquake-resistant". It connects directly to TY2 and TY4, offering enterprise customers access to more than 80 network service providers and more than 285 cloud and IT service providers, including Amazon Web Services, Google, and Microsoft Azure.

With a long-term goal to tap 100 percent clean and renewable energy, Equinix said its newest facility would see reductions in energy consumption and CO2 footprint through the implementation of energy-efficient lighting systems, adaptive control systems that consumed less power, and better cooling capabilities.

The vendor now operates 42 data centres across 12 Asia-Pacific markets, including Singapore and Australia, which are part of a global network of 200 sites.

Equinix in May said it was targeting to open 12 new data centres and expand 23 existing facilities in 16 countries by end-2019.

The data centre operator has detailed its 2019 global expansion plans that will see it open 12 new International Business Exchange data centres and expand 23 of its existing sites.

The global giant makes its move into South Korea.

Equinix said it will offer a choice of virtual network services from Cisco, Juniper and Palo Alto Networks.