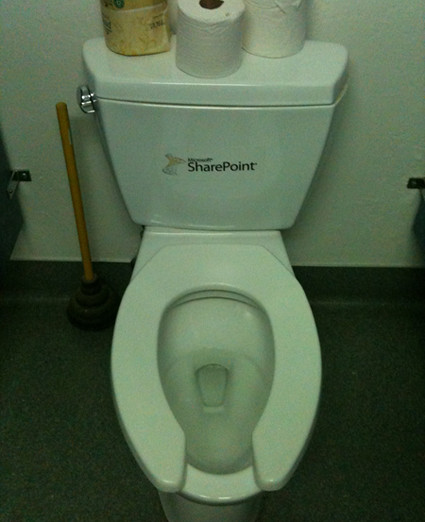 Box have previously received 14.6 million in funding, having started out as a freemium model cloud content management service primarily serving small to medium sized businesses and as a departmental solution in larger companies. The huge new cash infusion is intended to help Box become a cloud platform player. Speaking to Jason Green of investors Emergence Capital Partners earlier this week, who have also funded Salesforce, Successfactors and Yammer (Green is also on the board at Yammer) it is clear there are new enterprise class cloud alignments being heavily supported this year.

(Presumably the money meetings wasn't in the same controlling format as CTO Dylan Smith -who supposedly started the company with Levie using his poker winnings in '05 -endured on his 'Millionaire Matchmaker' 'be more attractive to women by getting hip-hop-ified' US TV appearance last year...)

Microsoft are fighting on multiple fronts to protect their franchises, and to the new breed of vendors orchestrating a coordinated air strike from multiple clouds, the intent is to 'aggressively outperform legacy software solutions on cost, flexibility, user experience, and speed of innovation' according to co ceo Aaron Levie. Emergence's Green told me they really like companies that do one or two things really well, and it's not hard to see the financiers clustering their bets around platforms to take on incumbents.

Box have openly taunted Sharepoint in their marketing, calling it 'Sharepoo' as I've previously discussed - the photo above is of the restroom at Box's current Palo Alto headquarters I used earlier this month, and their silicon valley billboards are seen by huge numbers of commuters everyday. Their closest cloud competitors are Dropbox and YouSendit.

According to Levie, Box.net intends to become what Sharepoint 'could have been', building data centers in Europe and Asia to satisfy document regulatory requirements and local legal jurisdictions as well as addressing latency issues and is investing substantially in expanding its mobile platform and partner ecosystem.

This last point is interesting because up until now Box has been largely seen as a content management point solution on other vendor's platform: they continue to be part of Jive Software's 'Social Business Software' ecosystem for example. Moving from their 'child' status on someone else's 'parent' platform will require not only that hefty chunk of change but also some changes in perception of the company as a credible enterprise scale platform. Box claim 60,000 companies, including 73% of the Fortune 500' are currently using their products, although I would imagine many of these are departmental or small businesses, and many are probably getting the free ride.

Box will 'significantly increase' international capabilities in 2011, with businesses outside the US currently accounting for 15% of Box's customer base, such as Wolseley (UK), Skype (UK), Datix (UK), Delkor Global (South Africa), Swire Shipping (Singapore), Panasonic (Asia Pacific), Kuehne + Nagel (Switzerland) Blue Marlin Brand Design (UK) and Solar Turbines (Mexico).  Sunpower (Spain), Coca Cola Icecek and Philips (China) are US headquartered but used extensively in those regions...this list provides a glimpse at the global market Box intends to expand into. Enterprise customers such as Clearchannel, Six Flags, DreamWorks, Cisco and Dell are some of Box's current US marquee reference names.

Multiple language user interfaces and addressing internet latency issues are essential for global enterprise platforms, and increased emphasis on mobile strategy is intended to help keep pace with the fast moving and expanding mobile world -  the company has seen 400,000 app downloads for iOS and Android, and features 150+ integrated partner applications such as Salesforce, Google Apps and NetSuite in the Box Apps Marketplace.

In taking this next step Box are closing some acquisition doors in electing to attempt to become a core piece of enterprise infrastructure rather than be swallowed up into someone else's larger offering. It's a brave and interesting move that will see them attempting to penetrate on-premise document and project management opportunities that are currently dominated by entrenched vendors, notably Sharepoint.

Box's collaboration and work flow tools are currently adequate but unremarkable, and while the user interfaces are well done and unintimidating, they are now attempting to enter the areas of business steeped in document versioning and email inefficiencies that have been so lucrative to Microsoft, who can't be blamed for not cannibalizing their licensing golden geese of Office, Sharepoint and Exchange yet, and probably made 48 million as you read this sentence.

Addressing the inefficiencies of these old ways of working are at the core of the modern collaborative enterprise, and it is primarily focusing on business purpose and performance from participants that ultimately unlocks the greater efficiencies possible with 2.0 technologies. The challenge for Box will be to avoid becoming a larger document and content graveyard while providing greater business agility, and this requires some cultural shifts in their offerings to target customers.