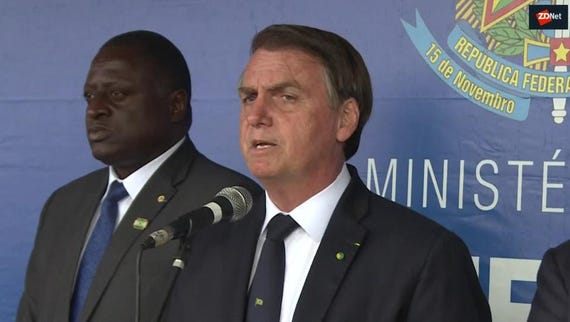 One of the state-controlled firms the Brazilian government is planning to sell has voiced concerns around areas including citizen data protection as the privatization agenda advances.

Employees at the Social Security Technology and Information Company (Dataprev) released a manifesto following the announcement that the company is one of the assets that Jair Bolsonaro's government is looking to sell in order to raise 1.3 trillion reais ($313 billion).

Dataprev provides technology information services to the Brazilian social welfare system. It treats and stores data related to millions of citizens on benefits. The federal data processing service, Serpro, is also on the privatization list.

The document, forwarded to the Lower House of the Congress, poses questions around what will happen to the personal data belonging to millions of Brazilians that both Dataprev and Serpro handle, crucially around benefits and tax.

ZDNet Great Debate: Do democracies really need to spy on their citizens?

In the wake of the PRISM debacle, David Gewirtz and Violet Blue debate the need for domestic surveillance.

"[Serpro and Dataprev data] could shift to private servers - this would undermine the security of information of almost all citizens that are in the social security system," the manifesto argued.

"This could compromise national sovereignty over extremely sensitive data," it added. No statements from the government have been made so far about what measures will be taken to mitigate any risks to data post-privatization of the tech firms.

Both Dataprev and Serpro are accountable for the development, maintenance, and operations of thousands of government systems. In addition to the platform underpinning tax reporting and social security payments to over 35 million people and wages of millions of public servants, it also develops innovations such a mobile app that uses biometrics to confirm a citizen receiving benefits is alive, released this month.

As well as arguing that Dataprev is profitable and does not rely on federal funds, the manifesto argued that organizations responsible for such a massive repository of critical data should not be on the privatization list.

"By relinquishing its own technology to buy third-party solutions, giving up the possibility of developing technologies in this field and becoming just a passive consumer, Brazil is moving in the opposite direction when compared to developed countries," the document noted.

"This is a policy that will widen the gap that separates us from other nations that focus on investing in research and technology."

Join Discussion for: Brazilian citizen data under threat with...