Investment in technologies related to the Industry 4.0 trend is moving up on the list of priorities for manufacturing companies in Brazil, according to a recent study.

Some 48 percent of 632 organizations polled by Brazil's National Confederation of Industry (CNI) said they plan on investing in technologies around automation and data exchange in manufacturing in 2018. On the other hand, 32 percent won't be doing so and 20 percent didn't answer the question. 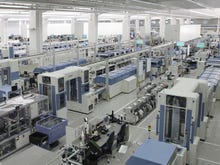 Germany's vision for Industrie 4.0: The revolution will be digitised

Industrie 4.0 has become a favourite theme for the country, with Siemens among automation's chief cheerleaders.

Of the manufacturers planning on expanding the use of these technologies, 96 percent already have digital initiatives in place and 4 percent have not started anything in that sense yet.

According to the CNI research, there was an increase in the number of organizations within manufacturing using technologies under the digital umbrella, from 63 percent in 2016 to 73 percent in 2018.

These technologies would include, for example, digital automation and integrated systems of engineering for development and product manufacturing.

The findings of the survey show that Brazilian companies within the manufacturing sector are still in an early stage of migration to digitalization and still in the process of deploying the technologies, says Renato da Fonseca, executive manager of research and competitiveness at CNI.

"This will be a gradual process, but the data already shows an evolution in the Brazilian industry," Fonseca adds.