France says while the UK is making tech talent feel less welcome, it is opening its doors.
Written by Frances Marcellin on March 14, 2019 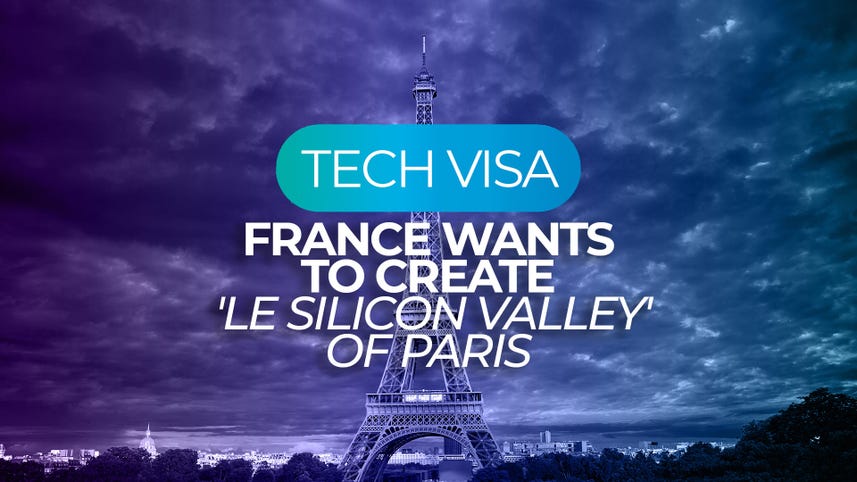 As the UK plans to tighten its borders after Brexit, and with the Trump administration continuing its anti-immigration stance, France has decided to head in the opposite direction over tech visas.

It has launched a new visa that allows startups to easily hire employees from anywhere in the world. The new scheme, unveiled on March 1, is described by government initiative La French Tech as one of the most open startup employee visas in Europe.

"The new French Tech Visa is more than just an overhaul of an administrative procedure. It's a message that France remains open and ambitious, and that we are supporting our thousands of startups in their complex path to growth."

Borlongan explains that a hiring shortage of product managers and in sales, marketing and engineering has caused a bottleneck and prevented startups from developing and growing as effectively as possible.

She also says the big-five tech companies, Amazon, Apple, Facebook, Google, and Microsoft, are raising salaries, making it even harder for startups to be competitive.

As startups often need to scale quickly, the visa has been designed to give founders the freedom to expand their company at the necessary pace.

There are four ways for startups to qualify: having the Young Innovative Enterprise (JEI) status; being a recipient of state funding; having backing from a French venture capitalist; or being supported by a VC that is part of the French Tech program.

"In the past, only 100-plus companies were eligible to use the French Tech Visa for Employees," says Borlongan. "Today, that number is closer to 10,000."

The new visa is free. It involves the same process no matter where the applicant is applying from, apart from Algeria, and costs less than €400 in administrative fees. A degree is not required, to take account of many coders, for example, being self-taught.

The visa, a collaboration between the French Directorate for Companies-Ministry of Economic Affairs (DGE) and the Ministry of Interior Affairs, also extends to spouses and dependents, so that women and men can take opportunities en famille.

In terms of duration, it is initially granted for four years, but is not limited to a single startup, so if the role does not work out as planned, employees can work for another startup, or, as Borlongan writes in an article on Medium, "create their own company in France". The visa is also renewable, and citizenship can be applied for after five years.

Meero, an AI-imaging startup founded in 2016, has 450 staff, but plans to hire 550 by the end of 2019. A startup scaling rapidly like this is the type of company that can benefit from this new French Tech Visa for Employees.

"This streamlined employee visa helps us to hire the most highly skilled workers across all our markets, supporting us and many other startups to put France on the map for tech innovation," says Gaetan Rougevin-Baville, COO of Meero.

At Station F in Paris, the world's biggest startup campus, around one-third of the community is from outside France, and this new visa will enable startups to hire more talent from beyond the EU.

"The top four countries that apply to Station F today are from the US, the UK, China and India – three, soon four, are from outside the EU, so we'll soon be able to meet this demand and help them bring themselves and their teams to Station F," explains Roxanne Varza, the director of Station F.

The visa complements the global vision of Station F, which Varza says no longer accepts startups that are not looking to grow their business internationally.

"Being able to hire international talent locally means they won't have to open subsidiaries and hire local teams in different countries," she says. "It could be much more cost effective and make their businesses grow internationally much faster."

The landscape for tech startup funding has shifted significantly since the 2016 Brexit vote.

Brexit worries are leading companies in information and communications to consider shifting some of their operations, mostly to Europe.

Paris and Berlin gain ground as investments in London drop amidst 'Brexit-induced uncertainty and alarm'.

Despite the growing risk of a no-deal Brexit, many tech companies don't know how to prepare themselves -- or even whether they can.

Impact of no-deal Brexit is already being felt on recruitment and investment. And uncharted waters lay ahead.

Brexit throws up a raft of questions for tech companies about how Britain's departure from the EU will change how they do business. Find out how it'll affect you.

Return of roaming charges after Brexit is a possibility, but not a given CNET

There's no need to panic just yet.