I pity the fool who doesn't want a gold iPhone. I mean, look at it. As rendered here by the Apple blog iMore, it's beautiful, right?

If you actually ignore the fact that you shouldn't like it, I genuinely think this looks pretty good. It's a shame iMore has only done a white and gold rendering -- I think it'd look even better in black and gold. 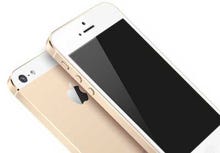 One of the latest rumors says Apple will add color to its next-generation lineup of iPhones -- champagne gold. But why?

In other territories, gold makes more sense. In the western world we might look at this as a bit (as we say in the UK) "naff" -- it's bling for the sake of bling, bordering on the chintzy. But in China for example the color gold has much more sway, culturally speaking. The same is true in India. One company over there will even sell you a gold HTC One. A gold iPhone is designed to play well in those markets without much effort.

In markets that would naturally be resistant to the gold color, this is more about fashion.

Before Apple introduced the unibody MacBook, no one made a beautiful laptop. Now Apple laptops are instantly recognizable and desirable if you don't own one, and a pleasure to tote around and touch if you do own one. A good percentage of Ultrabook designs look to emulate the appearance of the unibody MacBooks, even if they're made of silvered plastic.

If we look at mobile phones, we see a similar thing. If a vendor wants to mimic Apple, they'll make their device out of metal and glass. But, that metal is always silver.

Going for the gold

By creating a gold iPhone, what Apple will be looking to do is set a new fashion. They were the ones who created a desire for silver and glass, now the objective is to sell gold and glass as the must-have combination.

Remember,  Apple is a fashion brand , not a technology brand. Their intention will be to steal a march and make gold consumer devices desirable, whilst at the same time owning the most desirable, the most up-to-the-minute gold device.

A gold iPhone also solves a problem for Apple in that when the average consumer sees someone using an iPhone in public, it's not obvious that this device is the latest-and-greatest. The differences between the iPhone 4 and iPhone 4S were all internal. Apple's problem here is that it can only create a demand in the market for the "new shiny" when normal people can tell the difference.

And a gold iPhone does exactly that. It's the very definition of "new shiny." If you're in your favorite local coffee shop and see one of those lying on the table, you're going to know it's a new iPhone, thus increasing the potential of you wandering into your local smartphone store and buying one.

Never underestimate the power of the new shiny.

One thing I'll be intrigued to see if how on earth they're going to sell this in the keynote. Apple loves to control the message in their keynotes. But at this point everyone knows they're going to release a gold iPhone, and the audience of that keynote (mainly affluent tech reporters and bloggers from the US) is not going to be impressed.

There's no way Apple are going to want the audience groaning -- or even laughing -- at a new product, mid-keynote.

After the keynote, watch for all the other smartphone OEMs coming out with gold devices. They will be legion.

Mind you, I totally want a gold iPad too. That'd be awesome...