Broadcom CTO and co-founder Dr. Henry Samueli built up the company with his partner, former CEO Henry Nicholas. Nearly 99 percent of internet traffic passes through a Broadcom chip at some point – you'd think Samueli would be satisfied with its performance. 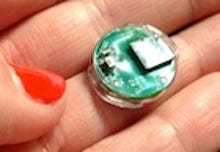 Broadcom CEO predicts a crowded market soon for wearable tech Before wearable tech can even get off the ground, Broadcom's CEO asserted that there are three challenges that need to be dealt with and overcome first.

Except he's not. While 2012 was Broadcom's most profitable year ever, "we did have a falloff in the stock's value in the third quarter," the result of a drop in earnings, said Samueli. But it was intentional. "We took that money and invested it in cellular broadband." However, when it comes to the 4G business, Qualcomm is still substantially ahead of Broadcom — a state of affairs he and the company are keen to change.

Samueli, the usually reticent tech chief of one of the world's largest fabless chip makers, doesn't get out in the media much, but he did have a lot to say about Broadcom's business on a recent visit to Israel, where he met with employees of the eleven startups Broadcom has bought in Israel since the company was established in 1991.

Those acquisitions, along with several others (California-based Beceem, Finland's Renesas ) are all providing the building blocks of the LTE technology Broadcom is developing. "LTE is evolving," said Samueli. "We are working hard to get the technology that will put us into the leadership position in the market. We are the market leaders in all other areas of telecom and networking, and we are able to drive the market. That's how we stay ahead, and we intend to do the same thing in 4G."

The recent Israeli acquisitions are intended to help the company achieve that goal, Samueli said. Five of the last eleven companies Broadcom acquired (and two of the last three) were Israeli. In an interview, for example, Rafy Carmon of Percello said that Broadcom had put him in charge of 4G small cell and femtocell development (Percello had already developed SoC small cell/femtocell technology and products when it was acquired by Broadcom in 2010).

"Tablets have increased the load on networks, and there is so much data coming through that you are going to need many more base stations to cope with it. Small cells and femtocells are a key technology for the cellular data future; because they are so much smaller, they can be deployed in many more places than traditional base stations.

The rule of thumb, "as need and speed increase, cell size must shrink and cell count must increase", Carmon said, adding that in 2010, "there were just a million small cells in use, but we expect there to be 40 million in use by 2015."

Samueli is constantly on the outlook for startups that can help Broadcom achieve its goals — especially if they are from Israel. "It's become a well-known thing in the company that when we need a new technology, we usually look at Israel first, because there is so much telecom innovation going on there," said Samueli.

Often, he will hear about an Israeli company from corporate VP Shlomo Markel, himself an Israeli and in charge of Broadcom's M&A and investments, and R&D roadmaps. Naturally, Markel has a soft spot for Israeli startups, but Samueli knows that Markel wouldn't recommend a company if it weren't top-notch. "It's not that we favor Israel, but that the best technology always seems to come out of that country," Samueli said. "By now, we usually look at Israel first," he said.

Join Discussion for: Broadcom CTO: Israel pushing us ahead in...