We repurpose an under-$40 Amazon monitor stand into an overhead filming rig. Our short video shows how we do it.
Written by David Gewirtz, Distinguished Lecturer on March 10, 2020 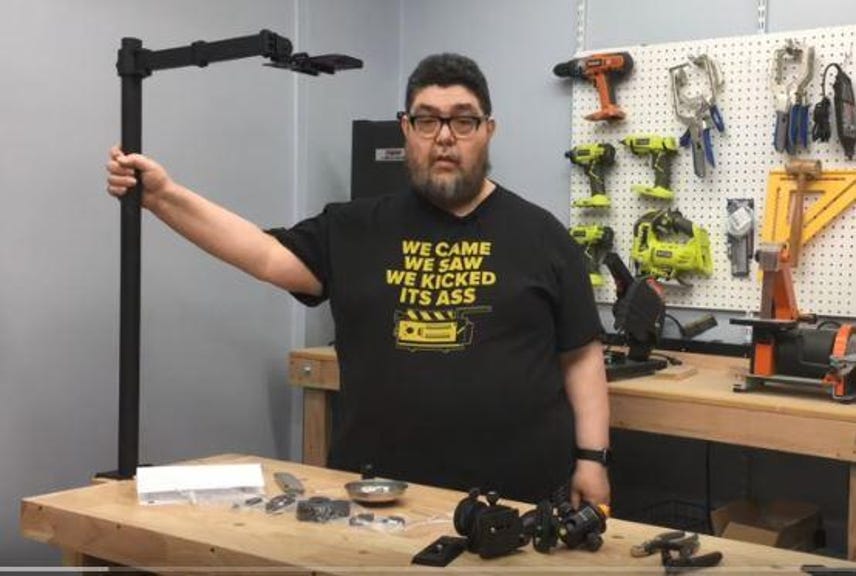 This is going to be a very quick article because the solution turns out to be very quick and simple. Overhead filming rigs are needed for a wide range of educational videos. I use them a lot in box openings and in how-tos, like when I showed how to open up the 2018 Mac mini and add more RAM.

The structure of such a rig consists of two main components: Some sort of gantry over the work surface and some mechanism to attach a camera to that gantry. Anyone who has filmed enough of these has probably tried a variety of solutions, from building something with 2x4s, PVC pipe, and even custom framing. The previously mentioned Mac mini overhead video was done by suspending part of a tripod over my workbench and attaching hand weights to the back to keep the whole thing from tipping over.

I've never been happy with my options until I ran across a video by food YouTuber Daniel Schiffer. He found an extra-tall monitor arm, removed the VESA mount, and repurposed it into an overhead camera rig. It was brilliant, so I copied him.

I bought the monitor stand from Amazon. At the time I bought it, it was $39.95. It's now listing for $37.99, so it's an even better deal than I got. The attached video shows how I put it together. It goes together about as easily as you might expect (except I dropped one of the polls on my head, just because). That's on the video, too. The only thing is, don't add the VESA mount to the end of the arm. There's a nice quarter-twenty screw already there, which makes it really easy to attach just about any camera mount you want.

All told, the project took me just under an hour to build, which probably contained an extra 45 minutes because I was filming. I've now used it a few times and it's a super-simple solution. I particularly like the bottom clamp, which should allow me to move it around. My next test will be to attach it over (and possibly in front of) some 3D printers to do some time-lapse filming.

Have you filmed anything interesting with an overhead rig? Feel free to share in the comments below.

Smartphones
Too much personal data on the web? Wipe it out for under $50