The title of this article does tell it all. RAM in the Mac Mini is upgradeable. That said, it's a tiresome and fiddly process that's not for the faint of heart.

First off, the picture Apple showed of the RAM in their announcement is incredibly misleading. RAM is hidden inside what's almost a Faraday cage of metal. To remove the RAM sticks, you have to remove the cage.

I only used three Torx bits, a T10, T6, and T5. I also used some tweezers and a little plastic prying tool. All of these were available in my iFixit Pro Tech toolkit, but you can certainly get basic Torx bits just about everywhere.

Back in the old Mac Mini days, you didn't need to remove anything except the back cover to get at RAM. Now, the same level of major surgery you once had to perform to replace a drive is what you now have to do to get at the RAM.

Be sure to watch the accompanying video, because it takes you through all the steps, with close-up images of the parts you'll need to remove.

Before I describe this process, I have to caution you. We haven't yet gotten a definitive answer from Apple, but the odds are you're voiding your warranty. You also might break the machine, since everything is so very tiny. This is what Apple means when they say upgrading RAM in this computer is not for consumers. It's not. But it is doable. 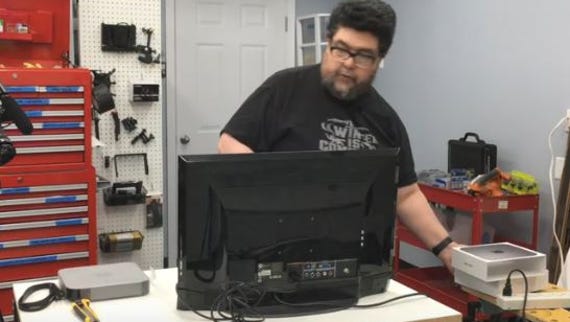 Disclaimer: if you break your shiny new computer, don't come crying to me. Neither I, nor ZDNet, nor our parent company will take any responsibility for your actions. You are on your own.

Here's the process in a nutshell.

Remove the round plastic base: This no longer twists to remove. You pry it off. This is easy if you're just slightly careful.

Remove the round metal base: This has six tiny screws. Use your T6 bit and be careful. When you lift the base off, there's a very short radio wire you'll have to deal with next. Very, very carefully remove both the screw from the radio mounting bracket and the radio connector.

Remove the fan: There are four screws, two on the side, and two near the top. It's not hard to remove, but the two near the top are inside the uniframe body, so be careful. You'll also have to remove a connector from the fan. This is delicate, so (here's a theme) be careful.

Replace the RAM: This involves removing four screws around the RAM cage. This is new for Mac Minis. Also remove the two rubber bumpers on the side of the RAM. Both the cage and the bumpers slide up and back. Then remove and replace your RAM...gently.

Also: Mac Mini 2018 makes the most of its veteran design CNET

OK, that's about it. Now reverse the process to put it all back together. Once again, watch the accompanying video for close-ups and the steps I took to upgrade my machine.

Good luck! Let us know in the comments if you have tried, or plan to try, to replace your RAM. Also, if you're using the new 2018 Mac Mini, tell us what you think.

Good luck and may the Force be with you.

After some time with the long-awaited update to Apple's mini PC, we're impressed overall -- but still have one big reservation.

Apple finally updated its long-ignored Mac Mini. With all the pro specs David Gewirtz has been asking for, lo these many years, he bought one. Here's what it's got under the hood.

The new Mac Mini is a powerhouse little machine, complete with Pro features and the ability to add a 10GB Ethernet port and 64GB RAM. And -- check this -- RAM is upgradeable after purchase.