If you spend any time on the road, to get work done and preserve your sanity you need to be able to hear your phone and your PC properly. I sat in a noisy coffee shop for the infamous Intel Thunderbolt conference call (configuration issues on the conference bridge made it very difficult to hear) and without an noise isolating in-ear the technical details were indecipherable.
Written by Simon Bisson, Freelance journalist and  Mary Branscombe, Freelance blogger on April 7, 2011

If you spend any time on the road, to get work done and preserve your sanity you need to be able to hear your phone and your PC properly. I sat in a noisy coffee shop for the infamous Intel Thunderbolt conference call (configuration issues on the conference bridge made it very difficult to hear) and without an noise isolating in-ear the technical details were indecipherable. Phone calls, Skype calls, Webinars, video demonstrations, podcasts; they're as much part of business life as email but doing them with built-in speakers or the cheap wire headset that came with your phone is like doing your business email with one hand in boxing gloves.

Even though I can type perfectly well on my BlackBerry Torch or Windows Phone 7 screen, my mobile email signature still has the 'snet frm smrtphn' joke to let people know they're getting a response that might be tempered by the medium. But I can't remember the last time I had to warn someone I was calling them through the Etymotic Hf2 headset I use for my phone as well as for blocking out the sounds of flying, for getting work done and for getting some sleep (the Hf2s are small enough that I can actually sleep with them in and sensitive enough that I can turn the volume on my iPod or Zune HD down as far as it will go for music that cuts out the background noise without distracting me). I've done conference calls walking down a London street, sitting on the waterfront in San Francisco or from the passenger seat of the car going round the South Circular and I can still hear every word. And deciphering quotes from interview recordings is a lot easier with good headphones. In fact the noise isolation is so good that it's disturbing; if I'm in the office I only ever put one headphone in because losing all the background noise feels very odd.

I'm a big fan of the audio quality of the Hf2s (the Hf3 is the same but gives iPhone users the extra remote controls); I've tried everything from Beats to Bose to Ultimate Ears to Westone to Shure to Sleek and the only in-ear headphones that match them are the triple-driver Shure models, which do have a slightly richer sound thanks to the better bass response but are also far bigger and rather more expensive. With any in-ear headphones it's important to try the full range of earpieces to get ones that fit your ear canal snugly; the Comply foam tips are excellent but I like flanged rubber earpieces best, although the larger ones feel like they go all the way inside my skull. I have a stockpile of the 'baby blue' Etymotic fittings (they last very well, but I like to pop in a clean set and remove some of the ear wax that's the inevitable consequence of things that go right into your ears). But recently Etymotic asked if we'd like to try getting custom earpieces moulded to fit. You can go to various places to get the moulds made; we stopped at the Etymotic stand at the CES show and had our ears filled with a fast-setting two-part compound. It only takes a few minutes, you can't hear much once it's in - and if you have good hearing you can hear the tiny crackle-pop sound of the compound curing as it hardens in your ear. 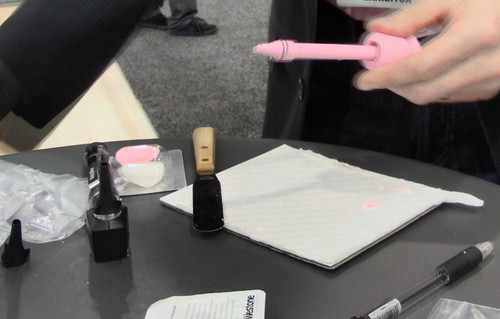 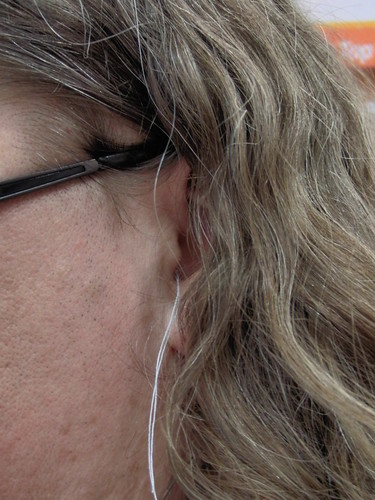 The thread for removing the mould 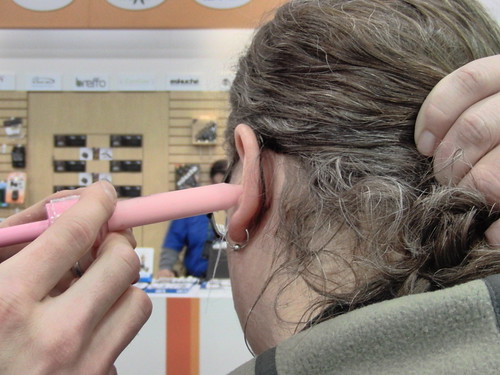 Injecting the compound into Simon's ear 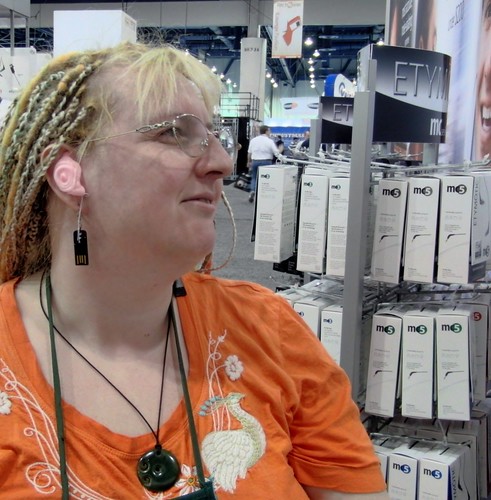 Cutting out the noise of CES 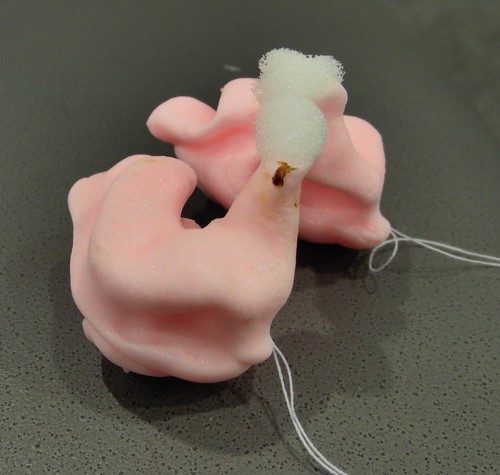 The moulds are sent away to the Etymotics lab (in the UK that's in glamorous Banbury) and in a couple of weeks you get a pair of clear earpieces of the same shape. They're slightly soft and squidgy; the Ultimate Ears equivalents are a hard plastic and although that's comfortable because the inserts don't move around in your ears it's also fragile. And because they're shaped precisely to your ears and few of us know whether our ear canal is straight or angled forwards or backwards putting them in for the first time is trickier than putting in standard headphones (once you have them in you can swivel the headphone post to the natural angle and that makes them easy to slip back in).

In my case, this was complicated by the fact that having used the Hf2s for a while meant it was time to change the filters (Etymotic are one of the few manufacturers to include spares). Once the filter blocks up with wax and dirt the quality and volume are significantly reduced - you also get a nifty little tool for pulling the older filters out, but the new ones just press in, as long as you have nimble fingers. For a distressing few minutes I thought I'd broken the headphones, or that the earpieces didn't fit, but with the replacement filters in and the earpieces at the right angle I was back in business - and back in audio isolation. I can't hear the helicopters that often fly past our office, I can't hear the music that's playing in the office - I can't actually hear someone talking to me. It's surprising how much more productive I am when I can't hear the world around me - and I can hear every word of recordings, Skype calls and phone conversations. The music sounds great, but so does the information I need.