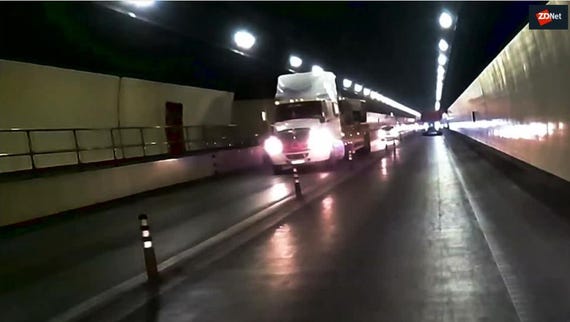 The L4 autonomous truck left from Tulare, CA, en route to Quakertown, PA. In all the drive took less than three days. According to Plus.ai, the company behind the autonomous technology stack that powered the truck, this is "the first L4 U.S. cross-country commercial pilot hauling a fully-loaded refrigerated trailer of perishable cargo."

The truck was equipped with an impressive sensor suite, deep learning algorithm, and simultaneous location and mapping (SLAM) technologies. Plus.ai provided the technology stack and is working with major manufacturers to bring autonomy a trucking industry that's been ailing under a labor shortage.

The industry employs about 3.5 million drivers but has had trouble attracting a new generation of drivers. At the same time, congestion costs the trucking industry more than $63 billion each year. There are also around 4000 deaths and 10,000 injuries attributed to trucks each year, with drivers faulted in the majority of cases. Autonomous vehicles could mitigate both problems.

The industry has been moving in that direction for some time. Freightliner received the first-ever license to test a semi-autonomous truck on the highway a few years ago, and in 2017 a truck became the first autonomous vehicle cleared for regular use on an American highway--albeit at slow speeds.

The Plus.ai journey, by contrast, was an important milestone in that the truck was operating at highway speeds and drove primarily in autonomous mode through the 2,800 miles across interstate 15 and interstate 70. Along the way it experienced a variety of weather conditions.

"This cross-country freight run with Land O'Lakes shows the safety, efficiency and maturity of our autonomous trucks, which are already delivering freight for other partners several days a week," says Shawn Kerrigan, COO and co-founder of Plus.ai. "Continued advances in our autonomous trucks will make it possible for these quick cross-country runs to be the norm in the future. We are excited to demonstrate what our technology can already achieve today while meeting rigorous autonomous driving safety and food transportation compliance standards."

Conditions on the route included night time driving, winding roads through the Rockies, construction, long tunnels, and both rain and snow.

"Self-driving and other emerging transportation technologies stand to completely reshape commercial shipping, so we are thrilled to collaborate with technology leaders like Plus.ai to pilot autonomous trucks for our shipping needs," said Yone Dewberry, Land O'Lakes' Chief Supply Chain Officer. "End of the year is a very busy time for us. To be able to address this peak demand with a fuel- and cost-effective freight transport solution will be tremendously valuable to our business."