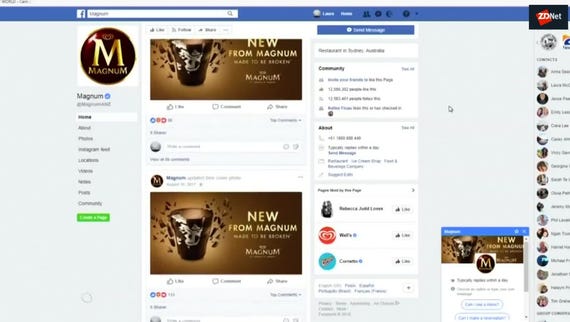 Big business has the most to lose from fake and harmful media content because of the trillions of dollars they've invested in their brands. If consumers cannot tell what is real they will hesitate to buy. It only takes a little fake news and people will question everything -- even the truth.

Unilever's warning this week to Facebook and Google that it will pull more than $2 billion in online advertising if they cannot curtail "toxic content" and fake news -- will force other large advertisers to reassess their advertising strategies.

"Fake news, racism, sexism, terrorists spreading messages of hate, toxic content directed at children -- parts of the internet we have ended up with is a million miles from where we thought it would take us," Weed said in a speech at the Interactive Advertising Bureau's Leadership Meeting in Palm Desert.

If Unilever leads other big advertisers to do the same it will be a massive disaster for Facebook and Google because between them they win about 85 percent of all new digital advertising deals.

There's a potential gold mine of billions of dollars in digital ads that can be won by traditional media companies which unlike Facebook and Google already have solutions in place that work extraordinarily well. It's a key competitive advantage over their code-restricted media competitors.

Facebook and Google insist on using algorithms or, in Facebook's case, asking readers for their expertise in recognizing real and fake news. Yet the recent global Edelman Trust Barometer survey found that most people say they cannot distinguish between what is quality journalism and what is fake. The survey of 33,000 people in 28 countries blamed fake content an unprecedented global loss of trust.

Why is Facebook asking its users to do its news filtering? Especially when Facebook reformats news stories including the fake ones and adds photos and layout to make them look highly professional, as it did countless times during the political elections and was never challenged.

Fake news websites look like they were made by a high school kid because they usually are but Facebook's layout algorithm made them look like the New York Times. It's no wonder people are confused about what they are reading if Facebook messes with the look and feel of a media brand.

Facebook's attempts to use its users to sort fake news or train special algorithms that don't work shows how little understanding it has about the problem including it's own role in creating it.

There is a solution to the fake news problem and traditional media uses it every single day -- employ editors. But Facebook and Google won't do it because they refuse to acknowledge they are media companies. They don't want the regulations and the social responsibilities of a media company so they insist on being classified as a technology company.

But it's going to be difficult to keep maintaining a tech company alias in Washington D.C. because politicians are hugely media savvy and if it looks like a media company it's a media company. You cannot hide behind an algorithm.

Late last year I was at a media dinner in San Francisco with Congresswoman Anna Eshoo who represents part of Silicon Valley and is very influential on communications issues such as net neutrality. She clearly sees Facebook and Google as being media companies. In addition, she expects them to be supportive to their country in the fight against Russian political influence and any other threats to national interests.

These are American companies, she said and she expects them to behave like loyal Americans.

I pointed out that they'd rather be in Switzerland. They'd prefer to be seen as neutral platforms that reflect a broader society -- with all its ills and conflicts.

It is the same for Amazon, Twitter, etc. You will see their lawyers in front of congressional panels and senate committees but you never see their CEOs facing the politicians. They understand that if they are seen as stooges for the US government happily giving up information on non-American users -- it will be very bad for business. There is a reason that America Online changed to AOL.

However, the Americanization and the politicization of Facebook, Google and the other digital media companies is inevitable. And it's likely going to raise costs of doing business and the cost of advertising -- which is not a terrible thing if it means less bad advertising and it levels the playing field a little with regard to traditional media and its higher operational costs.

For all the algorithmic and computational finery professed by Facebook and Google the emperor's clothes remain transparently non-existent when it comes to solving Unilever's multi-billion dollar challenge to their advertising business -- a challenge certain to mushroom over the coming weeks as every big brand rethinks their advertising strategies.

For each day that the fake news problem continues big brands are losing value. Can consumers trust that they are buying a real product? Is it real or fake information they are reading? Is that review real? Business will slow to a crawl as purchasing friction builds ever higher.

Once this type of general distrust takes root in consumer society all the careful brand building that took years of investments will be undone.

The production and promotion of trusted media content is essential to fighting fake news.

Large corporations have to lead the rebuilding of trust in society because they have the most money to lose while the rest of us have the most to win: higher quality media content helps us make better decisions as a democracy (garbage in -- garbage out).

But it needs more than putting huge monetary pressures on Facebook and Google. Businesses must also stop all marketing practices that damage trust perceptions:

- Native advertising should be stopped immediately -- advertisers deliberately confuse readers despite labels. Surveys have shown it reduces trust in the media publication that carries native advertising.

- Content marketing has to be restructured and it has to be more clearly labelled and defined from marketing content. The editorial content should be of service to the reader rather than self-serving. Media as a Service (MaaS media is the best corporate editorial media).

- Big brands must stop funding the fake news sites and hate speech sites through their indiscriminate ad spending and insist that the metrics and publishers on the ad networks are vetted.

- Advertisers should reprogram their programmatic dashboards and seek out the media companies that are already producing quality content free of fake news and toxic ideas. They are easy to find because they are the ones that employ editors, writers, photographers and have been publishing for many years.

- Unilever and other businesses must follow through on threats to shift their advertising spend -- but how will they do it? Where else can they spend billions of dollars in digital advertising? Facebook and Google will see it all as an empty threat if there's no viable competition.

- It is time for Unilever and other large businesses to help build a more competitive media industry. They should establish relationships with media companies that can become viable competitors to the social media giants.

Competition for billions of ad dollars will keep everyone highly motivated and engaged in solving the serious problems around trust and fake news -- these are fundamental bedrock issues that have to be solved in building a common future.

But threatening to shift billions of dollars in advertising is an empty threat if there is nowhere else to spend it.

We need a competitive media industry with sustainable business models -- if scale wins we lose. We are on a losing trajectory, imho.