A Senate committee has recommended the government fund an in-house visa system and ensure any automated decision-making projects are not pursued if automation, among other things, impacts upon fairness.
Written by Asha Barbaschow, Journalist on March 1, 2020 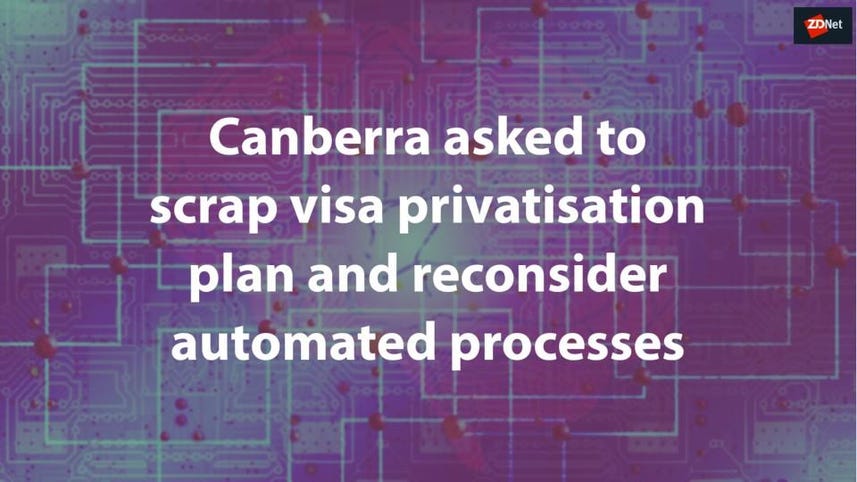 The Senate Legal and Constitutional Affairs References Committee has asked the federal government to reconsider privatising Australia's visa system and put more thought into how it handles decision-making for an automated system when the outcome impacts people's lives.

The committee has been charged with looking into the impact of changes to service delivery models on the administration and running of government programs, publishing its report [PDF] on Friday which focuses on the visa privatisation plan and robo-debt.

A decision on the tender was due to be made in October 2019, however, as of February 2020, no decision has been announced.

"The department's website asserts that the project 'does not involve privatising Australia's visa system or decision making'. Over the course of the inquiry a number of witnesses disputed this assertion," the committee wrote in its report.

According to the department, the private provider would not have any involvement in considering visa applications or "undertake any visa decision-making".

The committee said it was told the department would decide upon the "business rules" implemented by the new platform, and "it will determine which questions are asked of which applicants and the work flow process each application will follow".

"The committee rejects the assertion that tendering for a private partner to host the global digital visa-processing platform is not privatisation," it said.

After hearing concerns from universities that outsourcing may create a visa system "which is not equitable" and privatising any decision-making around asylum seekers would "never be appropriate", the committee has asked the federal government to not proceed with its plan.

"The committee recommends that the Australian government does not proceed with the Request for Tender (RFT) Delivering Visa Services for Australia -- Global Digital Platform, and seeks instead to fund and deliver an in-house solution," it wrote.

"Outsourcing Australia's visa processing system is a project fraught with risks, and the committee is not satisfied that these risks have been sufficiently addressed. The committee has concerns around procurement risk, data security, and equitable access to data and information for potentially vulnerable cohorts. The committee is also concerned about the lack of transparency around the tender process."

The federal opposition was content with the committee's request, in a statement saying that over 2,000 Australian jobs would be on the chopping block because of the visa privatisation scheme.

With the committee highlighting the limited nature of the tender and raising concerns about the adequacy of competition, Labor also took the opportunity to point to reports that Scott Briggs, a friend of Prime Minister Scott Morrison's, had removed himself from the visa processing bid after it was revealed his Southern Strategy venture made a "mistaken" AU$165,000 donation to the Liberal Party.

"The Liberal Party still refuses to answer any questions about the 'donations for tenders' scandal," the statement added.

The inquiry was looking into the risks associated with outsourcing the visa processing system, including procurement risk, economic risk, data security, and threats to national security.

"The [Community and Public Sector Union] argued that there are a number of examples of outsourcing projects that were covered by 'very comprehensive contracts…assurances and security mechanisms', which 'still resulted in major and damaging data breaches'.

The opposition also highlighted reservations that visa privatisation could lead to the next robo-debt.

The Online Compliance Intervention (OCI) -- robo-debt -- program automatically compared the income declared to the Australian Taxation Office (ATO) against income declared to Centrelink, which resulted in debt notices, along with a 10% recovery fee, being issued whenever a disparity in government data was detected.

The committee was also charged with looking into the automation of government services, especially automated decision-making processes.

See also: Shorten likens 'robo-debt' to the logic and ethics of a mob standover

"The committee recommends that the Australian government ensure any further projects that involve automated decision-making are not pursued if automation reduces service quality, impacts upon fairness, or reduces equity of access," it recommended.

"The committee recommends that Commonwealth departments and agencies have regard to the Commonwealth Ombudsman's guidance on best-practice in automation at the earliest stages of any relevant project."

Regarding the claim that robo-debt provided the government with AU$1.5 billion in revenue, former Labor leader and now Shadow Minister for Government Services Bill Shorten said "probably most of it" should be returned to the individuals who paid.

"Just relying on a computer algorithm was a stupid idea," he said previously. "It doesn't take into account that sometimes people are unemployed and people are employed … they have relied on a computer-generated program."

The committee also recommended the government assess all current and future proposals for outsourcing government services against a "public interest test", which includes flow-on economic and employment impacts. It also recommends that the Commonwealth public service Average Staffing Level cap be lifted immediately.

The committee also wants the government to provide a commitment that services dealing with complex cases and vulnerable people should not generally be considered suitable for outsourcing.