20 autonomous trucks and four autonomous blast drills will be added to Rio Tinto's Koodaideri iron ore operation in the Pilbara.
Written by Asha Barbaschow on May 6, 2019 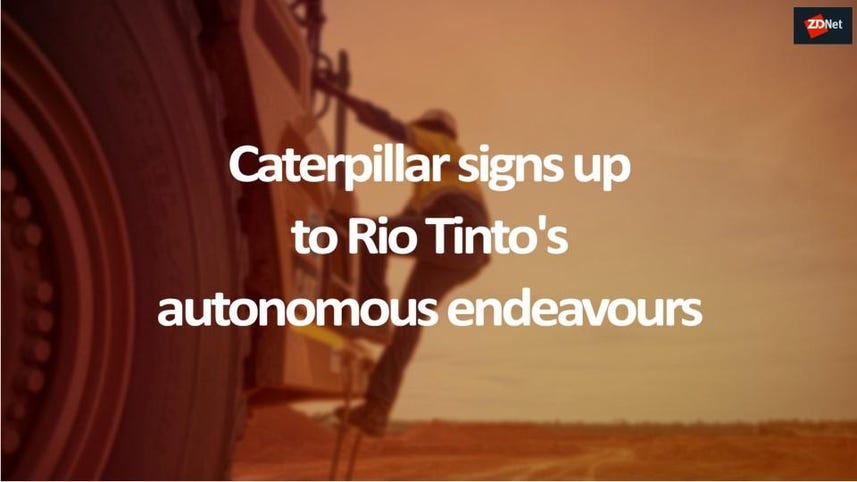 Rio Tinto has announced that global equipment manufacturer Caterpillar, through local Western Australian dealer WesTrac, will be providing it with a fleet of autonomous trucks.

The 20 autonomous 793F trucks will be supplied alongside four autonomous blast drills for Rio Tinto's Koodaideri iron ore operation in the Pilbara, Western Australia. Rio Tinto said the site will be the company's most technologically advanced mine.

"We're pleased to be partnering with Caterpillar and WesTrac to help make Koodaideri the most technology-enabled and innovative mine in our Pilbara iron ore network," Rio Tinto Iron Ore chief executive Chris Salisbury said.

"Technology is rapidly changing our mining operations as we harness innovation to make our operations safer, smarter, and more productive."

In parallel to the equipment supply, the companies also have plans to study the potential of increasing the level of automation for heavy mining equipment in the future.

11 years ago, Rio Tinto introduced fully autonomous haul trucks as one of the first steps in its Mine of the Future program.

"I smile when I hear the rush to develop autonomous vehicles by Uber, Google, and pretty well every car company on planet Earth," Rio Tinto's former CEO Sam Walsh said previously. "Rio was the first mining company to introduce fully-autonomous haul trucks in 2008."

The mining giant's Mine of the Future program covers the entirety of its iron ore business, including not just its 16 mines, but also comprises 1,500km of rail, three ports, three power stations, and a water and sewer system across an area the size of New South Wales.

The partnership with Caterpillar at Koodaideri will enhance the Mine of the Future program, which Rio Tinto said will connect all components of the mining value chain for the first time, as well as increase the use of automation and digitisation.

Caterpillar's machinery will be integrated with Rio Tinto's Mine Automation System (MAS), which collects and makes use of the data created by the company's mining operations, to improve productivity across Rio Tinto's entire iron ore network.

"The development and adoption of technology will continue to change the way we work and we remain committed to providing opportunities for new roles, new skills, redeployment, and retraining." Salisbury continued.

"Our partnership with the Western Australian government and South Metropolitan TAFE is working to develop the first nationally recognised certificates in automation, helping to ease the industry's transition to the mines of the future."

The announcement follows Rio Tinto in January completing the rollout of its automated rail network in the Pilbara, which is the first heavy-haul, long distance autonomous rail operation in the world.

The mining giant gained approval from the National Safety Regulator in May last year to test its autonomous fleet of trains in Western Australia and conducted its first automated mine-to-port delivery of iron ore in July.

Since completing its first delivery of iron ore via the AutoHaul project in July last year, Rio Tinto has steadily increased the number of autonomous journeys across its iron ore operations in Western Australia.

According to Rio Tinto, over 1 million kilometres have been travelled autonomously throughout the duration of the AutoHaul project.

Meanwhile, Rio Tinto's automated blast hole drill system enables the operator to use a single console at a remote location from the machinery and operate multiple drills. Walsh said such a system is much safer for the operators and is more precise using technology.

Rio Tinto said it has achieved the milestone as it works towards completion of its AutoHaul project by the end of this year.

Productivity
Top 25 emerging technologies: Which ones will live up to the hype?