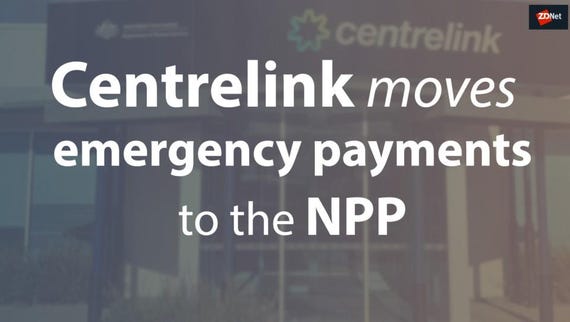 Centrelink will now be transferring urgent and emergency welfare payments in real-time, jumping on Australia's New Payments Platform (NPP) to make it happen.

The announcement from the Department of Human Services on Tuesday followed the six-month trial of emergency payments that was conducted via the NPP, which included sending AU$2.2 million in Australian Government Disaster Recovery Payments after the recent Townsville floods.

"This new platform will ensure help is always at hand even outside of normal banking hours or on public holidays," Minister for Human Services and Digital Transformation Michael Keenan said.

"Previously, if you needed help late in the day or over the weekend, factors beyond my department's control could see several days pass before payments were processed by an individual's bank. That is no longer the case."

The NPP went live in February 2018, allowing for the transfer of money from one person to another in near real-time by using an email address or phone number -- a PayID -- rather than the traditional BSB or account number process.

ZDNet reported in October that emergency payments would be the first government service to move to the NPP, before it then focused on payments that required the document feature or Request to Pay function available in the NPP.

Emergency payments, Reserve Bank of Australia (RBA) Assistant Governor Lindsay Boulton explained, are not just for natural disasters. The federal government makes about 2,000 emergency payments across the country daily, from a dedicated pool of funds that are paid to people in distressed circumstances, such as victims of domestic violence.

"[They're] out of their homes with no access to funds, so the government can actually get payments to them almost instantly when these people are actually standing at the counter or are on the phone -- so a significant benefit from that point of view," Boulton told Sibos in Sydney. "The Reserve Bank is already underway with a program to migrate those payments from an existing RTGS system across to NPP."

According to Boulton, the government also has a particular interest in some of the services that aren't yet available through NPP, but are coming down the pipeline.

"So that's Request to Pay -- the ATO is particularly interested in Request to Pay -- but combining that with payment documents, so obviously whenever there is a tax payment there's documentation that goes with it, there's tax assessments, there's information that has to flow back to the taxation office," he continued.

He said the government was also eyeing the NPP for further welfare payment delivery.

The Department of Finance has been given AU$11 million in funding to boost productivity across the APS, including by modernising Commonwealth cash management via use of the NPP.

Is PayID look-up no more a breach of privacy than a phonebook?

Being able to find someone's name and mobile number through the New Payments Platform PayID system shouldn't be used as a function creep, but it is, and NPP Australia says it's the user's choice to opt-in.