Can a server be configurable, expandable, practical, fun and tiny? The compact, curved and colourful microSERV3R range from Xi3 comes pretty close. 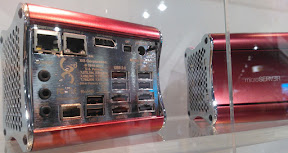 Xi3 crams a lot into the curved and colourful microSERV3R case

The metallic jewel colours and curving sides of these tiny PCs (about 4 inches on each side) aren't the only unusual thing. Inside the case — along with a large custom heatsink, a dual-core 64-bit AMD CPU and up to 128GB of MSATA flash storage — is a three-part motherboard (hence the 3 in the name). One part has processor and memory, a second board has the display and power components and there's a removable board and backplane for the I/O ports.

The three microSERV3R boards snap together; the swappable connectivity board is on the left

You can choose exactly which connectivity you want to start out with; say 8 USB ports, fibre channel and eSATA. Later on, if you need a different mix of connectors or you want to use a new connector standard, Xi3 will sell you a replacement backplane to attach instead. The company is also publishing the specifications to allow third parties to make replacement boards. 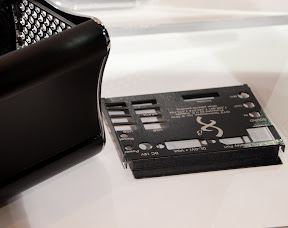 Change the connectivity board and you'll need a new back plate

At $899, you're paying for the small size and the convenience, but you can also pack microSERV3Rs even more densely than racks. On its CES stand, Xi3 had a datacentre in a trailer you could pull behind your car, made up of shelves — into each of which you can snap 20 microSERV3R units. The company is also hoping to sell into the embedded and home theatre markets.

Xi3 has a 20W desktop version of the microSERV3R that it calls a modular computer. If you want to share that, it's coming out with $100 TAND3M software this year that lets you connect separate monitors, keyboards and mice (a little like Microsoft MultiPoint Server, but it runs under Windows or Linux).

These aren't the smallest PCs or servers on the market (and VIA has been doing small motherboards for the embedded market for a number of years), but the microSERV3R is an interesting mix of stylish design and upgradeable functionality.

How to kit out your Raspberry Pi with a cooling case