Mike Arrington and Erick Schonfeld opened TechCrunch Disrupt in the abandoned 80,000 sq. ft office of Merrill Lynch in the Lower West Village of NYC this morning. It was a harsh reminder that mighty businesses and powerful companies can eventually become empty shells. 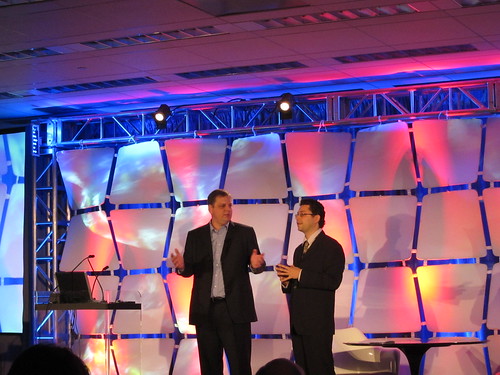 The phone you bought today is gonna be out of date in six months. As media becomes digital, the economics of disruption are hitting everyone. Zynga has made Kleiner Perkins more money faster than any other investment in their history.

TechCrunch says that there are three waves of disruption: the first is personal computing, the second wave is the Internet, and the third wave is social networking. John Doerr explains how the web is changing:

The third wave of disruption is social and mobile. We could be on the verge of reinventing the web. Instead of the web being documents and websites, it can be people, education, and relationships.

One of the really important drivers is applications; Steve Jobs taught us this. We have a whole new app economy, and that's transforming everything. The iPad isn't just a new iPod; it's bigger than that.

The iPad is not a computer, it's part of a wave of "immersive new kinds of magical surfaces" -John Doerr #tcdisruptless than a minute ago via Twitter for BlackBerry®

What do Steve Jobs, Bill Gates, and Mark Zuckerberg have in common? These guys are missionaries, they are pulled by passion. Mercenaries are sprinting; the missionaries stress the culture. 30 million people are playing Farmville at any given time. That is more than all of the people in the state of California. But how can you bring those people to do something useful, together? 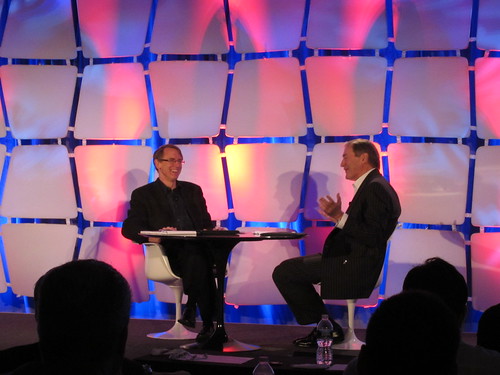 History tells us that the web's success has been through strong, ownable network effects. The value of the network goes up exponentially as it becomes more social. Google TV will change media for the better. It will give you a different view of things on the screen: watching a football game, click on that player running across the screen and learn about him. But what's "disruptive" mean? Disruptive innovation is a "term used in business and technology literature to describe innovations that improve a product or service in ways that the market does not expect, typically by lowering price or designing for a different set of consumers.[Wikipedia]" There is another technology that is interesting: when will you become emersive with the medium? Instead of taking the "web" and having websites be framed, this is a kind of cool, fluid experience. Apple cover flow, Cooliris... we will look back in time and say that the iPhone interface was from the stone age. The potential of the digital revolution in education has not yet begun to take shape. MG Siegler has a great writeup on this session on TechCrunch Andrew Nusca has a more detailed look at this talk.