Google's Chromebook attracted a lot of coverage as journalists with overpowered laptops reported the launch of an underpowered single-function device -- the modern equivalent of a dumb terminal -- that's limited to browsing the web. But after an initial burst of novelty sales, the Chromebook is starting to look like a flop.
Written by Jack Schofield, Contributor on Nov. 10, 2011

Google's Chromebook attracted a lot of coverage as journalists with overpowered laptops reported the launch of an underpowered single-function device -- the modern equivalent of a dumb terminal -- that's limited to browsing the web. But after an initial burst of novelty sales, the Chromebook is starting to look like a flop.

We can see Chromebooks sinking slowly down the Best Seller lists at Amazon.com, but it's impossible to know how well they are selling, because Google hasn't released any numbers. Chromebooks are pitched mainly at large corporations who are generally sympathetic to the idea of dumb terminals, and might even have a few attached to their old-fashioned mainframes, sorry, private clouds. But if these large corporations are adopting Chromebooks, they're not buying them from Amazon, so they're almost impossible to track.

Still, it appears that not all is well on the Chromebook front. According to a report today in Taiwan's Digitimes (Google pushing Chrome OS for PCs; vendors give it the cold shoulder), Google's former boss Eric Schmidt had no success with his Chromebook sales pitch in Taiwan yesterday. Why not? It's "due to demand … being lower than expected."

"In June 2011, Acer and Samsung launched their Chromebooks ahead of other PC brand vendors, but by the end of July, Acer had reportedly only sold 5,000 units and Samsung was said to have had even lower sales than Acer, according to sources from the PC industry. However, Acer has declined to comment."

It's hard to believe that Acer's Chromebook sales might be as low as 5,000 units -- around 1,000 per month -- when total PC sales are around a million a day. It looks as though Amazon's Kindle Fire tablet will sell at least 5 million units in the same amount of time.

It's hard to sell Chromebooks to consumers because they can buy similar netbooks with many more hardware and software features for less money. It might help if they cost half the price of a decent netbook -- $249 in the US -- instead of twice the price, but the Chromebook's price is inflated by the use of Flash memory to provide a fast start. (Amazon.com's current Chromebook prices are $349.00, $429.99 and $499.99, and they're £349 and £399 at Amazon.co.uk.)

As things stand, the Chromebook offers a cut-down netbook for about the price of a real notebook PC. A cut-down netbook that can't run Microsoft Office or Photoshop or iTunes or PC games and isn't much use when you lose your connectivity.

Last month, Google changed its subscription model so that schools and business only have to sign up for one year instead of three, though this also means they pay for their Chromebooks upfront. US schools can now get the Wi-Fi version for $499 or the 3G model for $519, while businesses pay $559 and $639 for the same devices. For the second and third years, schools pay $5 per month and businesses $13 per month for web-based support, administration and insurance. This puts the total cost of a 3G Chromebook at $951, which is almost four times the price of a netbook.

Google has helped Virgin America set up nursery-style Chrome Zones where potential customers can try Chromebooks and get help from "Chrome assistants". Virgin has also been renting out Wi-Fi Chromebooks for use on US flights. On September 30, London got its first Chrome Zone inside the PC World superstore on the Tottenham Court Road.

These efforts show that Google doesn't believe the Chromebook has failed, but if it had succeeded, they wouldn't be necessary.

It may be that sales will take off next year. Or it may be that Chromebooks are like the overhyped but short-lived Smart Books they so much resemble: they're a good idea in theory, but in reality, nobody actually wants to use one.

If it's any consolation, Microsoft didn't enjoy much success when it tried exactly the same idea with its instant-on Web Companions in 1999. 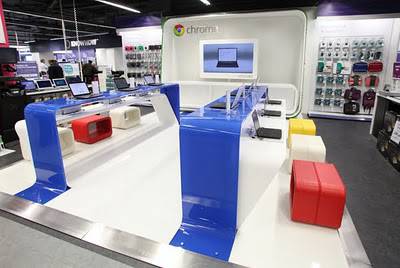 A Chrome Zone in PC World in London