Seeing the downturn as an opportunity to upgrade, nearly two-thirds of 1,200 IT professionals surveyed in the U.S., U.K., Germany, and Japan plan to invest in new infrastructure technology, according to results released this week.
Written by Dana Gardner, Contributor on June 24, 2009

Even in this global recession, one-third of IT organizations plan to increase virtualization, including cloud-computing initiatives, in the next two years, according to a survey conducted by Harris Interactive and sponsored by Microsoft.

Seeing the downturn as an opportunity to upgrade, nearly two-thirds of 1,200 IT professionals surveyed in the U.S., U.K., Germany, and Japan plan to invest in new infrastructure technology, according to results released this week.

While news in the past year focused on budget cuts for IT, 98 percent of those surveyed by Harris are planning either to maintain or increase investment in infrastructure technologies. Top priorities for those taking the bold approach of investing and innovating despite tight budgetary times, include:

Not surprisingly, keeping the lights on in the glass house is a bigger priority than innovation. 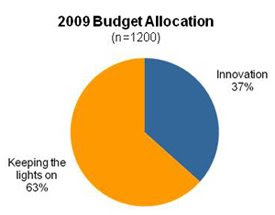 Innovation is less of a priority in the U.S. than it is in the other countries. When the percentages are broken out in the Harris report:

These percentages may reflect the fact that U.S. IT had been hit harder by the recession than those in the other countries, said Bob Kelly, corporate vice president of infrastructure server marketing at Microsoft. But the overall percentages show a slight trend to innovation, he said during a teleconference highlight the survey results.

“The ratio of 63 to 37 percent is actually slightly changed,” Kelly said. “About two years ago when we did similar research we saw that it was 70/30. So really, in this downturn we’re seeing an increased focus on innovation.”

Further he said the current research indicates that companies are falling into two categories when it comes to dealing with the recession. One group is retrenching and just holding on to their existing IT infrastructure while waiting for the recovery. The second group actually views IT innovation strategically as a way to pull out of the recession.

“They’re seeing this as their strategic opportunity to really make hay and move their business forward to accelerate out the other side of this economic downturn,” Kelly said.

The survey confirmed Microsoft’s in-house belief that IT budgets still have room for investment in infrastructure innovations, he said. The Redmond folks hope that will include convincing corporate IT departments, which pretty much skipped the Vista era, to finally move from Windows XP to Windows 7.

BriefingsDirect contributor Rich Seeley provided research and editorial assistance on this post. He can be reached at RichSeeley@aol.com.