Cobol — COmmon Business-Oriented Language — code was the backbone of batch and transaction processing on mainframes in large organisations for decades and fulfils this role to this day, on what would have been Hopper's 107th birthday.

While the number of organisations running Cobol has decreased, legacy applications remain — particularly in banks, government agencies and other conservative organisations adverse to the risk that comes with replacing critical system software. 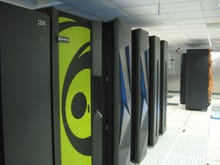 Why has Cobol lasted for so long? Those still working with the language think its persistence is partially due to the type of computing tasks that Cobol is suited to, core business logic, which is slow to change.

"Largely speaking, you don't really want the business logic to change that much. Rules do change, but actually, most business, if they are certainly transaction orientated, their business is the system. The bit that is unique about them is wrapped up in those systems," Stuart McGill, chief technology officer and general manager of Borland for Micro Focus told ZDNet recently .

As the number of developers who cut their teeth on Cobol dwindle, and universities take Cobol off their curriculum, demand for programmers with the skills to maintain legacy Cobol applications is increasing .

Hopper served as the technical consultant to the committee that defined Cobol — whose specification was inspired by the FLOW-MATIC language developed under her. The syntax of Cobol was informed by her belief that computers should be able to be programmed in languages closer to English than to machine code or assembly.

Hopper served with the US Navy, where she rose to the rank of rear admiral. During her time with the service she worked on some of the world's earliest computers, including the Harvard Mark I, a fifty-one foot long, eight foot high, glass-encased electromechanical calculator. This hulking machine could perform three additions or subtractions every second.

Hopper is also sometimes credited with coining the term computer bug when she traced an error in the Mark II computer to a moth trapped in a relay.

Join Discussion for: Cobol: Grace Hopper's gift to the world of...