During a telephone conversation between us last week Aaron Fulkerson of MindTouch said he was going to pick up on my Collaboration Networks meme, and he has now produced a solid post on this topic.Aaron takes on the number one issue plaguing widespread adoption of broad Enterprise 2.
Written by Oliver Marks, Contributor on June 8, 2009 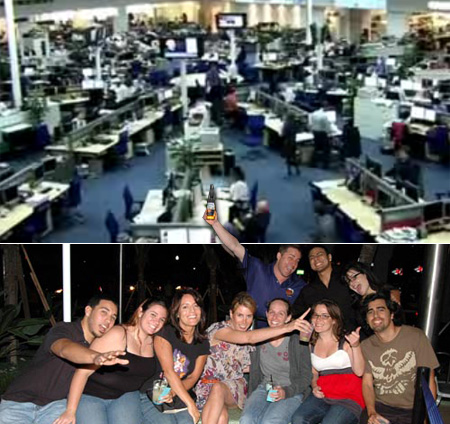 During a telephone conversation between us last week Aaron Fulkerson of MindTouch said he was going to pick up on my Collaboration Networks meme, and he has now produced a solid post on this topic.

Aaron takes on the number one issue plaguing widespread adoption of broad Enterprise 2.0 strategy: piecemeal departmental use of collaboration tools, while useful parochially, do not create a meaningful information fabric that weaves the entire enterprise together.

Tools and technologies are often budgeted for at a departmental level rather than being designed to interoperate between departments, which provides better financial and organizational value. The ability to scale the entire company instead of grappllng with disparate next-generation toolsets in each department that don't work well with other parts of the business is the way to multiple 2.0 silos in the future.

Many enterprise vendors are now adding components such as wikis, blogs, social profiles, tagging and so on as 'features', but...

This approach to software development does not work. The resulting application suites are monolithic, inflexible, not extensible, expensive to scale and are invariably difficult, if not impossible, to integrate with other enterprise technologies. This class of software forces business users to adopt the myopic social visions imagined by the developers, which are nearly identical to their corresponding consumer web implementations. In short, social software is not solving business problems.

Aaron also picks up on the need for flexibility and interoperability with existing applications and the crucial differences between consumer oriented social life networking and business focused collaboration networks:

...information fabric is a federation of content from the multiplicity of data and application silos utilized on a daily basis; such as, ERP, CRM, file servers, email, databases, web-services infrastructures, etc. When you make this information fabric easy to edit between groups of individuals in a dynamic, secure, governed and real-time manner, it creates a Collaborative Network.

This is very different from social networks or social software, which is focused entirely on enabling conversations. Collaborative Networks are focused on groups accessing and organizing data into actionable formats that enable decision making, collaboration and reuse. Collaborative Networks will increasingly be critically important to business and organizations by helping to establish a culture of innovation and by delivering operational excellence.

The following chart from Aaron does a nice job of differentiating from the noise around consumer social media: 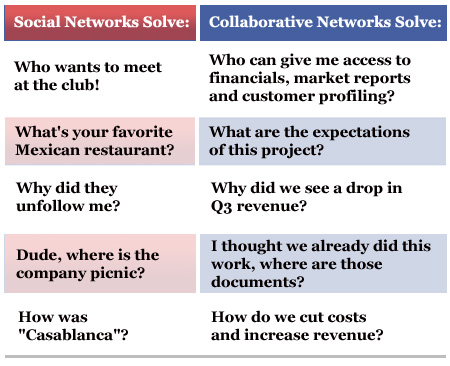 The point is clear: casual social life organization is very different to working together through deliverables to achieve results. It is this type of organization that justifies budgets...the apparently random chatter around sociable networks is not an attractive proposition in a business scenario on a number of levels.

A good example of large teams of people pulling huge amounts of information together to meet deadlines are the much maligned newspaper business. While the financial model in the newsprint business is currently a disaster, the ways newsrooms are being organized is going through changes as the fascinating Nieman Journalism Lab has been documenting in 'a collaborative attempt to figure out how quality journalism can survive and thrive in the Internet age'.

Journalists are given considerable latitude to work in whatever way they want so long as the end result is a successful edition of the newspaper. The best Enterprise 2.0 work methods give people unstructured, highly flexible tools to achieve well defined deliverables. There is considerable conversation in the social media space about tools effectively being a means to an end: this is clearly nonsense. As I've said before buying a toolkit doesn't make you a mechanic any more than starting blogging makes you a journalist. Using that blog to then talk and instruct about blogging is a form of navel gazing. In a great piece called 'inside five newsrooms that HL Mencken wouldn't recognise' Zachary Seward takes us through 'five newsrooms that are new, innovative, or otherwise noteworthy'.

Particularly interesting, partly due to the depth of information provided, is the English Daily Telegraph, which recently integrated its web and print operations while laying out the newsroom around a central “hub.”

The above video provides some great insight into the collaborative process that gets news out several times a day. By putting all the modular components of the business together around a hub the Telegraph is able to combine content for print, web, audio and video and combine content to make it consistent across rich media and come alive.

Clearly a news organization isn't the same as a manufacturer or software developer, but the homogenized way of working, in this case physically (all grouped around a central hub) provides great synergies and cross pollination opportunities that are goal driven. Delivery of news packages that are better than the opposition is not dissimilar to developing a better widget in a shorter time frame, and the economies of working well together are central to that success.