Tirana's Pyramid building has had quite a journey since it was created to honor Albania's communist dictator.
Written by Bojan Stojkovski, Contributor on July 15, 2019 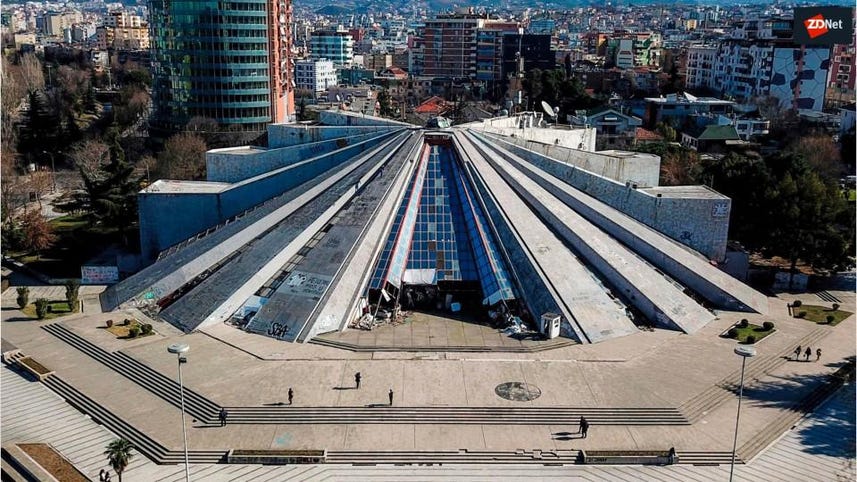 Once seen as a symbol for an oppressive totalitarian regime, a building resembling a pyramid in the center of Albanian capital Tirana is about to be given a new tech-centered lease of life.

The history of the Tirana Pyramid stretches back to the 1980s when the building was designed to celebrate the life of Albania's long-time dictator Enver Hoxha. The communist leader ruled the country from 1944 until his death in 1985, pushing the nation into deep isolation from the rest of the world.

Soon after his death, a group of architects, led by Hoxha's daughter Pranvera and her husband Klement Kolaneci, designed the structure of the Pyramid. The building was opened in 1988 as the Enver Hoxha Museum. At that time it was described as the "most expensive individual structure ever constructed in Albania".

However, its purpose of honoring the late Albanian leader was short-lived. After the fall of communism in Albania in 1991, the Pyramid instead became a cultural center, honoring Pjeter Arbnori, an Albanian gulag survivor and a victim of the regime.

During the 1990s, the Pyramid also became Tirana's hottest nightspot and a place where Albanian youth would gather and play during the summer.

"It's an iconic building in Tirana, one that reminds me of my early childhood. We used to climb on it and play there," Oliana Sula, a researcher at the Aleksander Moisiu University in Durres, tells ZDNet.

"Once, there were some nightclubs there too, especially when I was a teenager. There is certain nostalgia about the building, and it's not necessarily related to its original purpose."

In 2011, the Albanian government, which was then led by former prime minister Sali Berisha, wanted to demolish the building and set up a new parliamentary complex on the site.

However, Berisha's plan failed in 2013, when it didn't get the green light by the incoming government, led by current prime minister Edi Rama.

During his 11-year tenure as mayor of Tirana, Rama, who also has a background in arts, revived the city's bleak appearance with artwork and by repainting the gray communist buildings.

Now, Rama and Tirana's current mayor and ally, Erion Veliaj, are the principal backers of the transformation of the Pyramid, which is set to become a digital technology center and an IT hub.

The project is implemented by the Dutch-based design company MVRDV, which expects to finish the building's transformation this year.

"The project aims to give the building back to the public. The ground floor is opened up on all sides – inviting the public to participate in its diverse educational programs," the company notes in the project description.

With its new function, the Pyramid also reflects the transition that the Albanian society has been through since the the fall of communism. Developing IT and tech education means Albanian authorities are now focusing on real economic and social development.

"Maybe the Pyramid is a symbol of transition. First, it glorified a dictator. Then, it was a place for leisure activities. Now, we are finally moving towards real, economic, and social development." Sula says.

The Pyramid will also host a TUMO creative technologies center, which will offer a new type of free educational experience for Albanian youth, based on technology and design.

According to TUMO, an Armenia-based digital media learning center, its Tirana center will aim to provide thousands of Albanian children with courses and lectures in various digital fields, such as game development and web design.