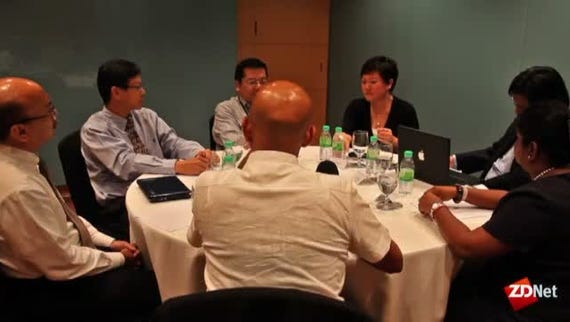 The Malaysian ICT market is expected to bounce back to double-digit growth in 2010 after shrinking by 3 per cent last year, according to an IDC analyst attending the first ZDNet IT Priorities Roundtable discussion, held in Kuala Lumpur last Thursday.

Maggie Tan, associate research director at IDC Malaysia, told the panel that consumer spending is expected to be the main force driving growth.

It's unclear if the lack of growth from the corporate market is due to CIOs in the region not having the right skills to justify their spending to the board.

Roundtable panellist Edwin Yapp, ZDNet Asia's correspondent in Malaysia — and a business owner himself — said that one problem faced by Malaysia is that generally its CIOs are still talking tech specs and software brands when pitching their ICT projects to the board, rather than building a strong business case.

"Too many of our IT managers, IT directors and CIOs are not articulating business value in terms of a business function — instead, they are talking about technical specifications and requirements, which CEOs and board level members don't want to hear."

Edwin explained that CEOs and CFOs want to know how new technology will affect their bottom line — they don't understand, or care about, the technology itself.

"This is one area where Malaysian CIOs definitely need to progress. CIOs are going to work more closely with CFOs so they better get this formula right because the finance chap is going to be the ultimate purse string remover."

Chris Cheong, regional IT director from global advertising firm Lowe & Partners, admitted that he has faced great difficulty justifying a refresh of the company's PCs and servers, most of which are between three and eight years old. However, the promise of significant productivity gains in the creative firm meant spending was allowed to equip the company's core design team with new Apple Macs.

We have not changed our hardware as frequently as I wanted. When you are doing creative services, the machines we last purchased was five to six years ago and because of the software that is available on the market — Adobe just launched CS5 — the machines that we have are unable to cope. So this year I forced them to change to the latest Macs that were available on the market."

The roundtable discussion also revealed that the financial crisis has resulted in many Malaysian firms to let spending on essentials such as security to lapse.

"Most Malaysian companies have the mindset, 'If you get attacked, then you start thinking about [security]'," said IDC's Tan.

ZDNet Asia's Yapp warned that this attitude is dangerous, "Your information is the most precious thing to you, and you have to do everything to defend it."

At this point, the discussion turned to the security risks — and associated costs — of social networking sites, especially Facebook.

IDC's Tan agreed but iterated that the move to publishing personal information on social networks was unstoppable.

"It's something that is unavoidable — you can't stop young people from going on Facebook and telling their whole life story," she said.

Yapp agreed and suggested that instead of blocking Facebook, companies should manage its use.

"I'm a believer that you can't stop tech trends ... so no point stopping technology but I think it's very important to establish proper corporate governance and risk management policies within the company," he said.

Lowe and Partners' Cheong revealed that although using Facebook is still permitted in the company's Malaysian offices, it has been banned in Thailand and Indonesia — partly because of security but mainly due to the bandwidth costs associated with employees to swapping large files, such as videos.

IT Priorities is an annual survey conducted by ZDNet to discover what matters most to IT decision makers in the Asia Pacific region. The next IT Priorities Roundtable will take place in Singapore on Thursday, 22 July.