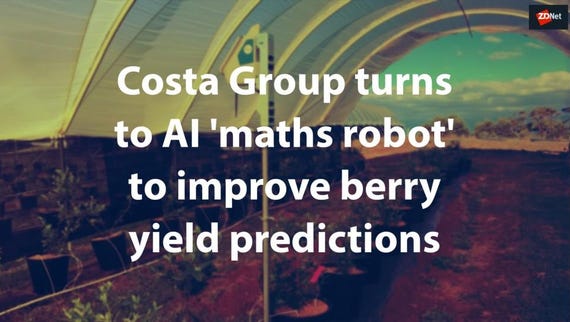 Costa Group, one of Australia's largest horticulturist companies, has begun rolling out an artificial intelligence (AI) system to help the company better understand and manage the quantity and quality of its berry crops.

The Sensing+ system, developed by Sydney-based company, The Yield, has been designed to measure 14 variables of a typical agriculture model such as rain, light, wind, temperature, and soil moisture in real time. The information is then ingested into an Internet of Things (IoT) platform and combined with existing data sets shared by Costa before AI is applied to create a localised prediction of each berry crop.

"We literally describe the system like a maths robot because it's effectively crunching through data and selecting the most important feature sets, creating models, putting them into production, measuring the accuracy, feeding that back in, and continually adjusting," The Yield founder and managing director Ros Harvey told ZDNet.

The system was recently installed within the polytunnels of Costa's eight berry farms in New South Wales, Queensland, and Tasmania.

"Those tunnels that Costa grows its berries in create microclimates where the weather service doesn't work anymore. So, effectively, we've created a weather service within the tunnels and that goes into both web and mobile with a whole range of capabilities around irrigation, feed, planting, protecting, and harvesting," Harvey said.


While the system has been used to predict the yield for viticulture and other vegetables such as lettuce and spinach, Harvey explained that using it to predict the yield of berries is particularly vital given the unique nature of how the fruit grows compared to other crops.

"It's been such a difficult problem for berry producers globally because unlike other crops, berries have many growth stages all at the same time," she said.

Using the data delivered through Sensing+ to better understand its berry yield, Costa Group uses the insights to also better manage labour and logistics costs, as well as the price of its berries in the market.

"We have been impressed with the accuracy achieved to date compared with our current manual approach," Costa Group CEO Harry Debney said.

"Accurate yield prediction allows us to optimise our costs and achieve better prices when negotiating with our customers. We supply produce to all the major Australian supermarket chains, independent grocers, and a range of food industry stakeholders. We also export produce to Asia, North America, and Europe."

Harvey predicted that more agricultural businesses would turn to technology to help reduce the risk of running their businesses.

"As we face a risky future with climate change and more unpredictable weather events, like we've experienced this summer, we're seeing a lot more production moving towards a way that's semi-protected, like Costa is doing where they're putting production inside these polytunnels that reduce weather risk," she said.