Full Bio
Posted in Between the Lines on August 30, 2019 | Topic: Internet of Things 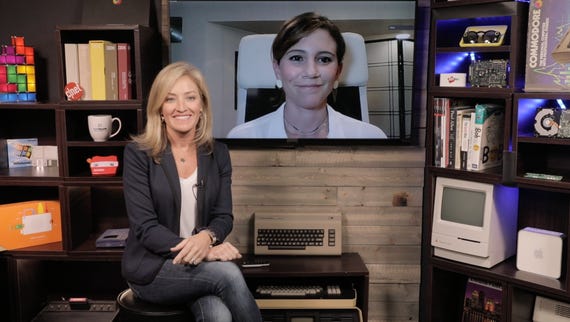 Down a quiet, two-lane road in Marion County, Oregon, bushes lining the road bend under the weight of ripe blueberries. They're ready to be hand-picked and packed into plastic containers and pallets at a processing facility just a 10-minute drive away.

It looks like a humble operation, but there's high stakes involved for the farmers and fruit processors of Marion County. After growing their family-owned businesses over decades, they're shipping their delicate, temperature-sensitive fruit all over the world. One glitch or careless misstep in the shipping process can damage hundreds of thousands of dollars worth of product.

"It's easy for people to think of a produce truck as not really high value, but the value of a blueberry truck could be over $100,000," Aaron Ensign, president of fruit distributor Curry & Co., said to ZDNet. "So it's a significant investment. And ensuring that you're optimizing that value, and that you're protecting that value throughout the supply chain, is really critical."

Keeping tabs of the supply chain isn't just important for the purposes of efficiency, but also for ensuring the quality and safety of the product. Maintaining a temperature-controlled supply chain is a vital part of business for produce, as well as other fresh foods and other products like pharmaceuticals. The cold chain market is expected to be worth $447.50 billion by 2025. It's why tech businesses like Intel have been investing in the Internet of Things -- sensors that can be deployed as far afield as a blueberry patch in Brooks, or a shipping vessel on its way from Oregon to Indonesia -- as well as blockchain platforms for building distributed ledger networks.

"The data that we start collecting can be so useful at the edge for making decisions in real time,"  Ninette Vaz, Intel's Global Supply Chain IoT Senior Manager, told ZDNet. "But also, as you start aggregating all that data, you start to see patterns that are very useful for all kinds of decisions on route scheduling, or understanding why you might use different suppliers -- maybe with some suppliers, the temperature is more in control than with others... You can see patterns you had no idea existed."

In July 2018, Intel teamed up with Curry & Co. for a pilot project to refine its supply chain solutions. Specifically, they deployed the Intel Connected Logistics Platform (ICLP), Intel's Hyperledger Sawtooth Blockchain and Microsoft Azure to track a truck of blueberries. The project began as soon as the berries were harvested at Sinn Farms, a small family-run farm in Marion County. It followed the berries as they were processed at the Curry & Co facility and as they were delivered to a customer in Portland, Oregon.

The ICLP comprises both hardware and software. Customers can deploy a collection of sensors, including one "parent" and as many "child" sensors as needed. They can monitor variables such as temperature, humidity, light, tilt shock and location. All of the sensors can communicate with each other, and the parent -- or gateway sensor -- relays information to the cloud. The gateway sensor is also GPS-equipped, unlike the others. Customers can establish how frequently they want data captured and sent back to the cloud, in "near-real time."

Using APIs, customers can use the ICLP to track other pieces of data collected by separate sensors.

The ICLP then communicates the data it collects to the cloud while simultaneously creating an immutable record on the blockchain. It can connect with Hyperledger Sawtooth Blockchain platform or any other blockchain ledger system.

For the purposes of the Curry & Co. pilot project, Intel tracked the temperature, humidity and location of the berries. They deployed one gateway per "lot" of berries -- in other words, one gateway for each crop of berries harvested. They used a collection of "child" tags to trace each pallet of berries collected.

Like many industries, the fresh produce sector has its own unique challenges. The pilot project helped Intel gain insight into those challenges, particularly those related to tracking a climate-controlled supply chain. After blueberries are harvested, they have to be chilled almost immediately to just above freezing, between 34 and 35 degrees. After the berries are processed, they have to remain refrigerated until they make it to the customer.

The insight Intel gained during the pilot helped it develop the second generation of ICLP, which can accommodate a wider range of cold chain use cases. When the pilot started, the Intel team thought its sensors were optimized, said Laura Rumbel, a consumer experience enabling director at Intel. But they soon learned where their assumptions had gone wrong.

The team also gained valuable insight into how to build a battery for the sensors that can accommodate extremely low, sustained temperatures. "We wanted something that would meet the performance requirements of the customer but still handle the environmental constraints of this industry," Rumbel said.

Now that the pilot project is over, Ensign said his business would have to assess whether Intel's ICLP, or any other IOT supply chain solution, would be worth the investment. However, he said the value of near-real time tracking was obvious.

From its various distribution centers, Curry & Co. exports produce to about a dozen countries around the world, 52 weeks out of the year. The berries can be in shipment for weeks at a time. If their climate-controlled environment is compromised, no one may realize it until the shipment arrives at its destination, spoiled.

By contrast, Ensign said, "let's say that we're shipping a load of blueberries to Dallas. If we see in real time that there's been a disruption in temperature, we can then react to the situation. We can say, 'Let's put another load on the highway, and let's divert that shipment to someone who's going to process and perhaps freeze it, or make juice or something else.'"

There's also value in using blockchain technologies to maintain accountability. If, for instance, a customer lets its shipment of berries sit out in hot temperatures for hours after its arrival, Curry & Co. can be sure it's not at fault for the berries' quality.

Quality assurance isn't just an issue for individual farms or distribution companies, but for the state as a whole. Agriculture is a major part of the economy in Oregon, and the state produces more than 100 million pounds of blueberries a year.

"American farming is about trust, honor and integrity," Ensign said. "Any time we can incorporate technology" to build that trust, he said, "that's huge."

Join Discussion for: Intel tunes its IoT solutions with the help...