Could 'The Toyota Way' &amp; Enterprise 2.0 Rescue the Big 3 US Auto Companies?

Andrew McAfee of Harvard Business School, who coined the term Enterprise 2.0 and with whom I am on the advisory board for the conference of that name, wrote a fascinating blog post earlier this month: 'The Enterprise 2.
Written by Oliver Marks, Contributor on Dec. 14, 2008

Andrew McAfee of Harvard Business School, who coined the term Enterprise 2.0 and with whom I am on the advisory board for the conference of that name, wrote a fascinating blog post earlier this month: 'The Enterprise 2.0 Recovery Plan'.

It's a long post, and posits the theoretical question of rescuing a big three automotive company through the power of Enterprise 2.0:

Recent events in the news have inspired a thought experiment: I asked myself what I would do if I were put in charge of IT as part of the turnaround effort at a big US automaker.... I imagined that one of the big 3 American auto companies was taken over tomorrow by enlightened and aggressive new leadership whose only goals are to restore the company to operational and financial excellence. This leadership is enlightened (in my book) because it believes firmly in the power of IT to help businesses achieve their goals and differentiate themselves in the marketplace, and will fund and fully support whatever initiatives I propose (this is a complete fantasy for several reasons, but thought experiments aren't supposed to be constrained by reality).

Andy goes on to detail a set of principles to deliver results and benefits as quickly as possible:

- The company 'knows' the answers to our questions - Most people want to be helpful to each other, and to the company - Expertise is emergent (Complexity science uses the term 'Emergence' to mean the appearance of a global structure as the result of local interactions). - People are busy - Weak ties are strong - The ability to convert potential ties into actual ones is valuable - Platforms are better than channels - Platforms are better than channels - The mechanisms of emergence should be encouraged - Anyone can learn the new tools

- These are themes McAfee has explored in detail on his blog - it's well worth taking a look to get into the details of the above.

McAfee's 'thought experiment', a deliberately rather cerebral exercise to demonstrate utility, struck a chord with me and reminded me of this summer's McKinsey 'Global Survey of Web 2.0 in the Enterprise'. I was struck by something pointed out to me in that by Stowe Boyd:

"The developed countries of the Asia-Pacific region had the largest percentage of respondents expressing the highest level of overall satisfaction with Web 2.0 tools, and Latin America had the lowest"

(McKinsey are a bit slow off the bat adopting the term Enterprise 2.0 since it wasn't invented there... 'As Web 2.0 gains traction, it could transform the way companies organize and manage themselves, leading to what some have dubbed Enterprise 2.0...')

Key principles of the Toyota Production System (TPS) like Kaizen (continuous improvement) and Genchi Genbutsu (go look, go see) are at the heart of the success of the Japanese auto industry, which has a deep culture of collaboration internally and with suppliers.

Could there be a correlation with Asia Pacific business culture adopting and 'being the most satisfied with Web 2.0 tools' in McKinsey's report and Toyota's TPS? 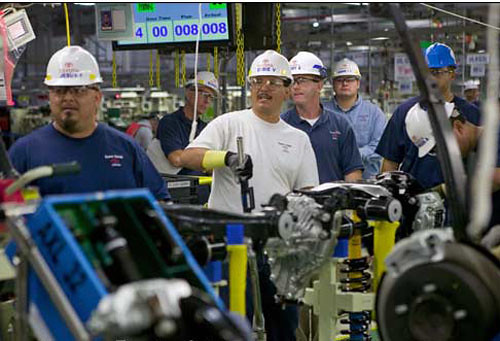 Principles such as Nemawashi (consensus-building) and Yokoten (moving knowledge around the organization) are the sort of thinking needed to get the maximum bang for buck out of Enterprise 2.0, which is just a collection of IT tools without the benefit of an overarching philosophy and strategy to guide usage.

Layers of siloed legacy IT are almost certainly a limiting factor in Detroit (as opposed to McAfee's concept of a structure of IT components complimenting each other to create a global whole) and there's a chicken and egg dilemma summarized by McKinsey:

... forward-thinking companies seem to be taking a more business-centric approach to the adoption of Web 2.0... Satisfied respondents say that, in large measure, business units rather than IT departments are driving the selection of Web 2.0 technologies. Dissatisfied respondents report the reverse: IT units take the lead, choosing the tools and then delivering them to business units...

Forrester Research's Gil Yehuda echoes this thinking while 'Predicting the battle over collaboration infrastructure in 2009' on ZDNet:

(This 'battle' is a whole other topic I will address separately in another post; firewalls are involved...)

Addressing the needs of line of business - which the 14 principles of 'The Toyota Way' philosophy ultimately is serving - seems to be the key to rejuvenate the moribund motor industry in the USA. I'd go so far as to say that Toyota's success is a blueprint for many other areas of industry, and has real value in the global economic recovery.

The ten year old Toyota University in Gardena California has in the past opened its doors to outsiders, welcoming students ranging from home builders to soldiers, to city cops. They helped streamline the LAPD's jail division, a hub of inefficiency and low moral, for example.

Toyota's relationship with the LA police began after University of Toyota dean Mike Morrison met an LAPD officer and offered to help at the officers' next training meeting.

About 60 sergeants, lieutenants and senior officers gathered at a church for a "Drum Circle Spirit," an African style exercise that Toyota sometimes uses to build teamwork. A Toyota educator had the officers form a circle and start drumming. Then Toyota's drum-circle leader began conducting, speeding and slowing tempos, forcing the cops to play together -- a metaphor for supervisors working together with common processes.

The LAPD students went on to work together as a team to identify areas that streamlined efficiency: 'discovering the most important part of any machine: The part that isn't working'

Their assistant police chief subsequently told them their ideas were "breakthroughs" and said the department would implement them all. Most of them had never had a supervisor listen to their ideas - the dozens that teams devised at Toyota's university the LAPD estimates could save more than $1 million annually.

These are very much people processes, but line of business collaboration technology enablers supercharge this type of teamwork.

The question for Detroit: would it be easier to break the mold and start again or can you teach an old dog new tricks, adopting this sort of team thinking?

I personally would love to see the big three return in a blaze of glory, offering the world state of the art, uniquely American vehicles again. Maybe Detroit management needs to take advice from US football coach Lou Holtz - "I never learn anything talking. I only learn things when I ask questions. "