The US Army has pondered the development of camouflage that mimics how cephalopods rapidly change their colour and patterning. They call it 'signature management'.
Written by Stilgherrian , Correspondent on Feb. 11, 2020 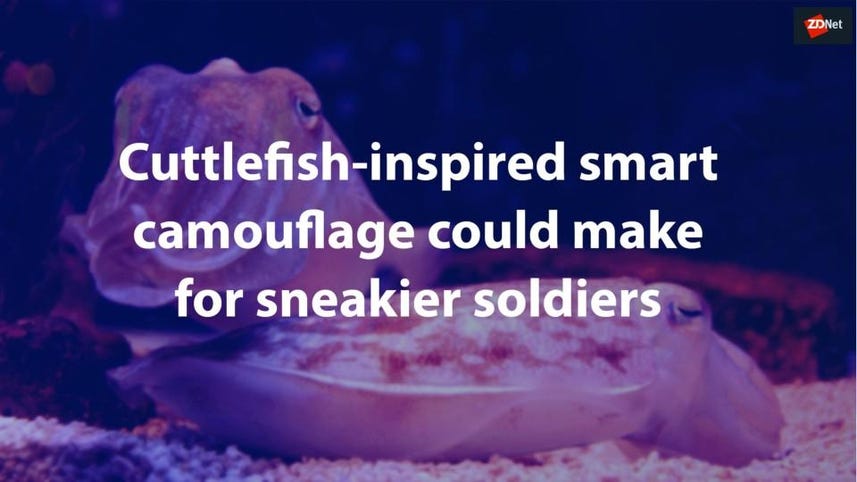 For some time, engineers have been experimenting with robotic tentacles modelled on the octopus. Now they're being inspired by their camouflage.

Cephalopods -- cuttlefish, octopus, and squid -- are renowned for their ability to rapidly change their skin colour and patterns to match their surroundings or warn off attackers.

Their skin is studded with sacs full of pigment called chromatophores, each one surrounded by 18 to 30 muscle fibres that can rapidly change how much pigment is exposed.

It also seems that the skin itself is somehow "smart" and can, in some circumstances, work independently from the animal's brain.

According to Alon Gorodetsky, associate professor of chemical and biomolecular engineering at the University of California, Irvine, understanding these biological capabilities could inspire the engineering of dynamic materials for military camouflage applications.

That could include reconfigurable infrared (IR) camouflage coatings and IR invisibility covering -- something that's of increasing importance as more IR sensors are deployed on the battlefield.

Gorodetsky and his colleagues have already demonstrated the potential of such a "dynamic thermoregulatory material" which was inspired by squid skin.

"We draw inspiration from the static infrared-reflecting space blanket and active colour-changing squid skin to design and develop a tuneable thermoregulatory material," they wrote.

By varying the mechanical strain on the fabric, thereby changing its characteristics, they could regulate the body temperature of its wearer.

The potential military applications of such technology were discussed at a workshop, called Bio-Inspired Signature Management for the US Army, convened by the National Academies of Sciences, Engineering, and Medicine.

While the workshop was held in September 2019, the in-brief proceedings were published last week. It's a fascinating read.

Participants discussed the possibility of "smart skin" fabrics that would include light sensors that could enable "adaptive optoelectronic camouflage systems inspired by cephalopod skins".

The fabric wouldn't have to be smart enough to exactly match its surroundings. Disruptive dazzle patterns could be more effective than background-matching, particularly against edge-detection algorithms, participants said.

One example cited was a school of stripe-patterned fish, which utilise their speed and shifting direction to confuse predators.

Predators also use disruptive camouflage. A cuttlefish might do five primary camouflage changes in the course of 20 minutes to approach prey.

The challenge, participants said, is how you would actually manufacture a smart skin.

Smart skins would have to include micro-structure components yet be made in metre-scale fabric. They would also have to be flexible.

The possibility of commercial manufacturing techniques are "nearing short-term now", said Dr Michelle Povinelli from the University of Southern California. But not all participants agreed.

"To date, the participants had not seen engineered systems actively change shape after receiving cues with an active skin," said the proceedings.

"Knowledge is lacking as to the level of effort needed to understand these observed capabilities from biology and bring them to practical systems. Its associated timeline -- be it a 1-year, 10-year, 20-year, or beyond challenge -- is unknown as well."

The drugged-up programmer soldiers of 2030

This isn't the first time the US Army has brainstormed a long-term vision of emerging technologies for soldiers.

One discussion paper, The Future Soldier's Load and the Mobility of the Nation [PDF], without irony talked about "information and load sharing within the tactical fractal" and "exoskeletal strength amplification for body armour and ordnance" and "aerial overwatch of fractal for anticipatory awareness".

"A powered exoskeleton would be available and integrated into the Soldier system," it said.

"The use of the VR capability would enable Soldiers to interact with robotics, software systems, and hardware platforms via an array of 'third generation' interfaces that will rely on natural language commands, gestures, and virtual display/control systems."

Future soldiers would have "cultural aids" such as automatic language translation.

"Soldier's speech is automatically translated and broadcast in a realistic voice," the paper said.

They'd also have a "cross-cultural communication/negotiation aid" that would tell a soldier "how well an exchange is going" and suggest "paths to optimising the exchange".

If such technology was implemented, future soldiers would be expected to master some extremely agile software development skills.

"Soldiers will be able to assemble their own software tools and interfaces on the fly by making 'mash-ups' of diverse software modules, including those that they create (assumes that computer programming becomes a common skill, perhaps realised via highly intuitive programming concepts such as 'wiring together' widgets)," it said.

Soldiers might even make use of "cognitive enhancers" such as nootropics or other smart drugs, and even "neural prosthetics" or brain implants, according to the paper.

No TikTok for soldiers: US Army bans Chinese app

It comes as the social media video app releases its first transparency report.

Microsoft is getting HoloLens ready for battle in a $480m military deal for 100,000 headsets.

Microsoft CEO Nadella: HoloLens for war is fine if it's used by a democracy

Microsoft's Satya Nadella defines when it's OK to use its HoloLens technology for military purposes.

Professional Development
Remote working vs back to the office: Benefits are clear, but there could be trouble ahead for some