SINGAPORE--Expect to see the death of bring your own device (BYOD) as an enterprise mobility strategy next year, which will be instead be taken over by a new trend Choose Your Own Device (CYOD), according to IDC's Asia-Pacific Predictions for 2014.

"I hate to be the bearer of bad news but one thing is that BYOD doesn't have a great [return on investment] ROI, there isn't one," said Charles Anderson, head of telecoms and mobility for IDC Asia-Pacific. He was speaking as a panelist at the research agency's event, which highlighted CYOD as one of 10 key trends for next year.

Anderson pointed out there were also costs associated with supporting users, devices, security when accomodating BYOD. Beyond mobilizing a person, there was little value in that, he added. "These people are going to bring their devices into the enterprise and what are they going to do with them? You give them access to e-mail, but they're already at work, so they probably have access to e-mail already."

He noted what happened more often that not, was that devices would be used for non-intended purposes at work such as streaming movies and watching TV. The analyst pointed out one of his clients in Singapore saw its network bandwidth double in the month after they launched a BYOD initiative because "people were basically watching YouTube videos all day long".

While BYOD policies will still be around, many factors will push CYOD to become the main adoption model. The process typically involves the enterprise allowing users to choose from a small pool of approved company issued devices, usually based on an operating system or two.

The degree of standardized environments, allows for easier management and security planning for the IT department. Different job profiles would also be eligible for different devices, and some groups may not even qualify to get any company issued gear but instead be given limited access on their own equipment.

"What CYOD is really about, it's IT regaining some of that control and securing applications, and delivering tangible business benefits," explained Anderson. 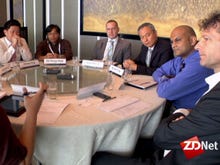 Asia firms still uncertain about BYOD support Companies in the region are unsure if, and how, they should support the use of personal devices in the office as questions dealing with data and support remain tough to resolve, note participants in ZDNet roundtable.

Having a limited pool of pre-approved OSes and devices can help IT departments mobilize more business processes and applications. For example, devices would be able to load up work applications based on the user's profile.

Anderson brought up SAP as a case study of a company which had successfully implemented CYOD. The software firm had a challenge about a year and a half ago, when they were all using one type of device that the employees did not like that much, he explained. The company was afraid of the security risks in opening up to BYOD, so it outlined 3 different OSes and 10 different devices that employees could choose from such as smartphones, phablets and tablets.

"So what they want to do is mobilize the person and process in one step. They also have this challenge; they don't want to push this device on everybody, people have preferences, form factors, operating systems, and they're really opening up and allowing them to use them. It's taking off and last I heard they're managing 70,000 devices under this," the analyst said.

One consideration when weighing between a BYOD and CYOD policy is that in developed markets about 75 percent to 80 percent of devices are Samsung or Apple-branded, Anderson noted. That's compared with emerging markets where such brands will make up only 40 percent and will have more different types of devices and form factors to take into account, he added.