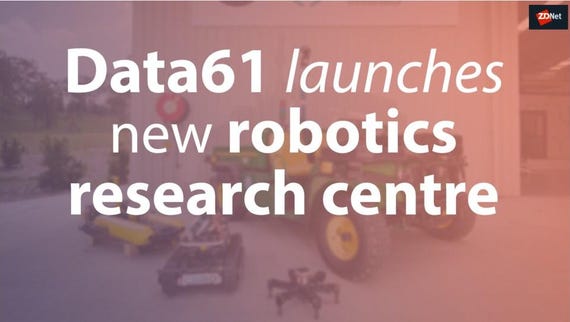 Data61, the Commonwealth Scientific and Industrial Research Organisation's (CSIRO) technology arm, on Tuesday launched a new centre dedicated to the research and development (R&D) of robotics and autonomous systems.

The research centre will be used to develop robotics systems that can interact safely with humans in both indoor and outdoor environments, according to Data61 Robotics and Autonomous Systems group leader Fred Pauling.

One robotics project already under way at the centre is a trial of technology that rapidly maps, navigates, and searches underground environments. The trial is part of a three-year challenge funded by the US Defense Advanced Research Projects Agency.

Data61's robots are already being used to inspect and create 3D maps of underground mines to monitor the biodiversity in the Amazon rainforest, Pauling said.

The launch of the robotics centre, Data61 CEO Adrian Turner said, will further the development of robotics and autonomous systems technologies that help add new value to Australia's economy.

"By creating a cohesive approach to robotics R&D through closer collaboration, supported by world-class facilities like the Robotics Innovation Centre, we can ensure Australia is well placed to benefit from Industry 4.0," Turner said.

Last year, Data61 formed the Sixth Wave Alliance alongside various universities, companies, and government organisations -- a network that seeks to enable a higher level of research collaboration in Australia, according to Data61.

Data61 has also partnered with Transport for New South Wales (TfNSW) to create a tool that helps improve the efficiency and effectiveness of transport systems. The Traffic Congestion Management program, which has been under way for a few years, models the impact of network changes or disruptions and then issues automatic journey planning information for transport operators and travellers.

Since Data61's inception in July 2016, the CSIRO's technology arm has completed at least 317 research projects and flagged an additional 364 projects as being in progress as of December.

The tool uses statistical machine learning to hopefully prevent the spread of infectious diseases in Australia.

Data61 is helping the state prepare for a road network that will be used by autonomous vehicles.

But a regular database arguably remains the better solution.

Announced during D61+ LIVE, the partnership is expected to secure cyber-physical systems through Data61's seL4.

How IoT is being used for Australian agriculture in 2019 (TechRepublic)

The development of IoT for agriculture is still in its early stages, but it looks promising as more farmers are putting these technologies to work.