Founder Cody Wilson insists that a recent court injunction is still being obeyed, despite the launch.
Written by Charlie Osborne, Contributor on Aug. 29, 2018 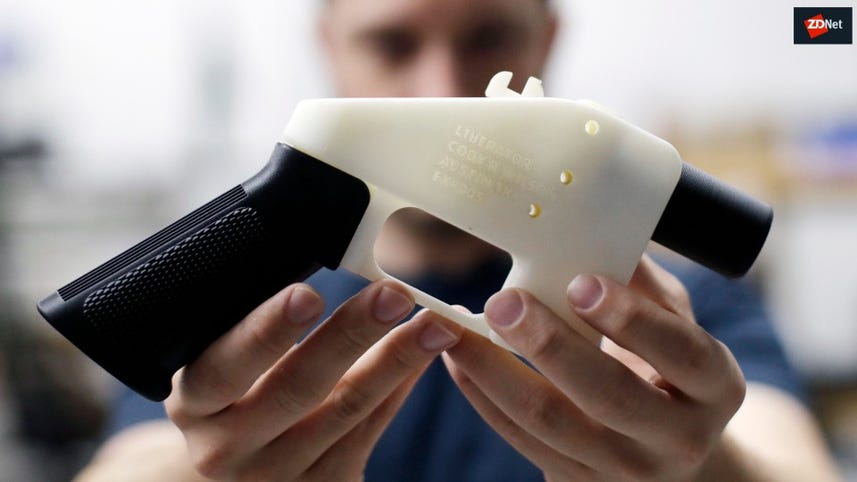 Defense Distributed has begun selling blueprints for guns that can be 3D printed at home in what may be considered circumvention of a court injunction aimed at preventing the spread of the designs.

The website's blueprint repository, DEFCAD, is now live and contains a variety of designs for weapons including an AR-15, Beretta, and the original "Liberator" gun which made headlines in 2013 after it was found to cost only $25 to print.

Files on offer through DEFCAD are CAD designs which can be used to manufacture parts with the assistance of a 3D printer. The blueprints are being offered on a "name your price" basis, with a suggested token payment of $10.

When founder Cody Wilson originally set up the website, such files were offered as free downloads. However, the US State Department requested that Texas-based Defense Distributed take the designs down due to firearm export laws, specifically, the US International Trade in Arms Regulations (ITAR).

Wilson complied with the request but also took the matter to court, arguing that banning the company from offering the CAD files infringed upon his right to bear arms and freely share information under the First Amendment.

The US government then quietly settled with Wilson earlier this year, permitting the files to once again go live.

However, it took no time at all before a number of US states appealed the ruling on the grounds of security and a judge imposed a temporary restraining order on DEFCAD.

The appeal was accepted which resulted in the restraining order transforming into an injunction which prevents the weapon designs from being freely downloadable and stops the settlement between Wilson and the Trump Administration from going ahead.

"The court finds that the irreparable burdens on the private defendants' First Amendment rights are dwarfed by the irreparable harms the States are likely to suffer if the existing restrictions are withdrawn and that, overall, the public interest strongly supports maintaining the status quo through the pendency of this litigation.

For all of the foregoing reasons, plaintiffs' motion for a preliminary injunction is granted."

Injunction or no, Wilson has evolved DEFCAD into something else. Now, the blueprints are for sale, this may get around the free distribution argument involved in the court case.

"Regulation under the AECA means that the files cannot be uploaded to the Internet, but they can be emailed, mailed, securely transmitted, or otherwise published within the United States," the documents read.

The sale of gun designs is not mentioned.

Speaking to Gizmodo, Wilson said that Defense Distributed will comply with the court order by mailing purchased plans on a USB drive, emailing them, or sending them by secure means.

As the designs were already uploaded to DEFCAD, it may be that Wilson can circumvent the spirit of the ruling -- bending, but not breaking the order.

In a statement last week, Attorney General Ferguson, one of those that appealed the Trump Administration's settlement, said he was pleased that "we put a stop to this dangerous policy." However, now the gun designs are on sale, the tone has changed.

"Because of our lawsuit, it is once again illegal to post downloadable gun files to the Internet," Ferguson told Gizmodo. "I trust the federal government will hold Cody Wilson, a self-described 'crypto-anarchist,' accountable to that law."

So, the fight over 3D printed weaponry continues. However, it may be a losing battle to fight against distribution at this late stage. The moment a controversial file is uploaded, more copies spring up -- and it takes little effort to find 3D printed guns and weapon parts online from other sources.