The Dell Streak seems on paper, to be neither one thing nor the other. It is an Android device which launched with Android 1.
Written by First Take , Previews blog log-in on Dec. 8, 2010

The Dell Streak seems on paper, to be neither one thing nor the other. It is an Android device which launched with Android 1.6, but has now been updated to Android 2.2. It has SIM support and it has a 5-inch screen. That makes it rather too large to count as a smartphone but way to small to compete with the likes of the iPad as a tablet device.

The Streak is also too small to compete with the 7-inch Samsung Galaxy Tab or Disgo Tablet 6000. 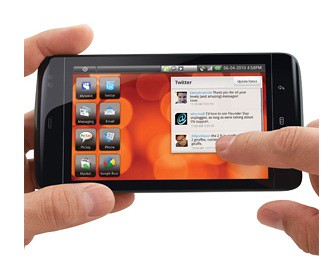 Physically the Streak is fantastic. I was sent a sample with a bright red back which adds to the visual appeal. But it is the shiny almost enamelled finish to the back and curved edges as much as the colour that make the Streak look and feel great in the hands.

It is just the right size for holding two handed to type on the keyboard. There have clearly been some keyboard design changes since we wrote our original review and I found typing easy and the keyboard well designed. The separate number pad has been banished in favour of a full screen qwerty keyboard and Swype is included. Overall, I found the capacitive screen really responsive.

The screen size suits web browsing too, with no need to pinch to zoom to read text on many pages, and the wide screen mode offering a good view of pages in the 800 x 480 pixel screen. Because the Streak now runs Android 2.2 it streamed video from web sites too. The Streak found an almost immediate home for me as a mobile internet device in particular for web browsing and email. 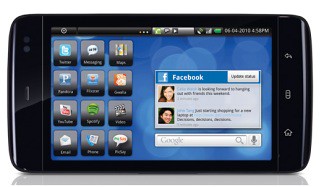 Dell’s skin for Android is quite attractive. There are seven home screens and some nice widgets that help make the most of them. Of course Facebook and Twitter widgets are among them, but there is also a nice web bookmarks widget, one for shortcuts to music and one for contacts all of which have room for thumbnails presented in a grid. The main screen houses a grid of nine recently used apps and today’s weather.

Dell has populated the Streak with oodles of third party applications including Amazon’s MP3 store, a 30 day trial of the CoPilot navigation software, the superb Evernote, Amazon’s Kindle Android app, YouTube client and QuickOffice for creating and editing Word and Excel documents and reading PowePoint and PDF documents.

The technical specs are impressive. The screen is made from Gorilla Glass and does a good job of resisting scratches – I wasn’t able to make a mark on it with a pen knife. There is a front camera for video calling and a 5 megapixel camera on the back. 16GB of microSD card based storage is included. The 1GHz Snapdragon processor moves along nicely. HSDPA and Wi-Fi ensure smooth communication. And there’s GPS of course.

Battery life isn’t fantastic and I’m not a fan of the proprietary connector for charging, but this is used because the slot is compatible with Dell accessories. The charge cable is at least USB at the other end, but it is short so that using the Streak while it was charging was challenging.

Battery life aside I found the Streak a pleasure to use, but after more than a week of use I still can’t help wondering if it really does have a niche. I wouldn’t want to carry it daily as my phone. While it could take on this role it is simply too large. And if I were choosing a tablet device I’d definitely want something with a larger screen– I’m settling for 10 inches as my preference currently.

So, the Dell Streak is a third purchase, and it is not an inexpensive one. My red sample currently costs £361.09 inc VAT and delivery from the Dell web site without a SIM. As a point of comparison, a SIM free 16GB iPad direct from Apple’s web site costs £429 with Wi-Fi only, £529 if you add in 3G. Operator deals bring the unit price down considerably, but then you have to pay for your SIM.

With all that in mind I’d love to see Dell make a 10 inch screened Streak, and retain the superb hardware design and great usability. Keep the price down and Dell might have a true iPad rival on its hands.

Galaxy S23 Ultra vs iPhone 14 Pro: Which flagship should you buy?