Full Bio
Posted in Between the Lines on December 8, 2016 | Topic: Cloud

The company's third quarter results include 52 days of EMC's business and VMware. Dell said revenue from its legacy businesses were largely unchanged in the third quarter.

According to Dell, third quarter revenue was $16.25 billion with a net loss of $1.64 billion. Non-GAAP earnings for the third quarter were $970 million.

Dell said its top priority is integrating the salesforce from EMC and channel partner programs to boost cross-selling. Dell EMC has been rolling out integrated systems since the merger closed in September.

The infrastructure solutions unit for Dell had operating income of $897 million on revenue of about $6 billion.

Meanwhile, the company said it paid down $500 million in debt in the quarter. The EMC purchase closed September 7.

Dell's traditional PC business fared well as consumer revenue surged 12 percent and commercial was down 1 percent. The client solutions group had revenue of $9.2 billion, up 3 percent from the third quarter a year ago. Third quarter operating income was $634 million. 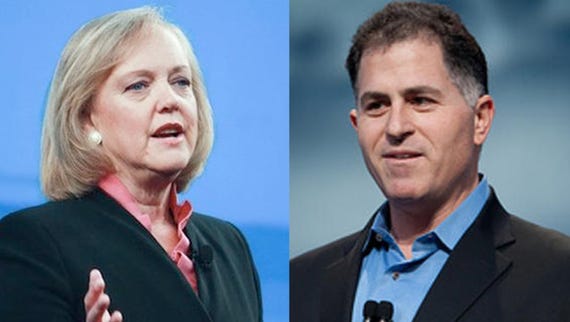