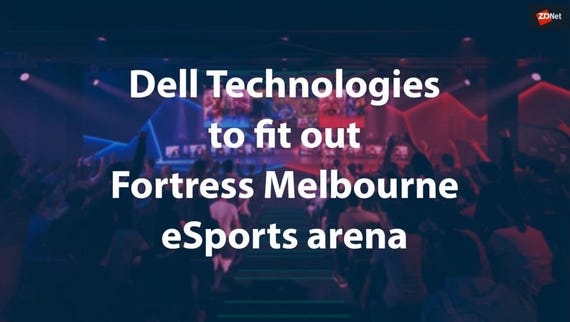 Dell Technologies has announced a partnership with Australia's eSports venue Fortress Melbourne that will see the tech giant be its "end-to-end" technology provider.

Touted as the largest video gaming and eSports venue in the Southern Hemisphere, Fortress Melbourne will include a 200-seat main arena that will be known as the Alienware Arena.

It will also feature a LAN Lounge that will be equipped with Alienware PCs.

The space will house more than 150 of Alienware's Aurora R9 gaming PCs in the new Legend ID design with liquid cooling and Nvidia GeForce RTX 2080 and 2070 SUPER GPUs, and Dell Pro Support services provided for all devices.

Fortress Melbourne will be supported by a "complete end-to-end infrastructure solution", from Dell Technologies that the company said will power its business, as well as deliver "the best gaming experience for visitors".

"We want Fortress Melbourne to become the go-to venue for all Australian gamers, which is why we're so excited to be partnering with Dell Technologies," Fortress Australia CEO Jon Satterley said.

"By having our venue equipped with Alienware's powerful gaming PCs and peripherals, as well as infrastructure from Dell Technologies, gamers of all skill levels will be able to experience the best gaming equipment in the world."

Fortress Melbourne is slated to open next month.

Cyber crooks take aim at their next big target: eSports tournaments and players

Researchers at Trend Micro detail the ways in which the multi-billion dollar competitive online gaming industry could be vulnerable to malicious campaigns including DDoS attacks, malware and extortion.

Because gaming cheats are not all that different from malware, Kaspersky launches esports anti-cheat solution.

How esports, athletics, research and business blend together at NYIT

ZDNet caught up with NYIT's athletic director Dan Velez to talk about the university's esports program, the CyBears, and the intersection of business, technology, and sports.

Join Discussion for: Dell Technologies to fit out Fortress Melbourne...