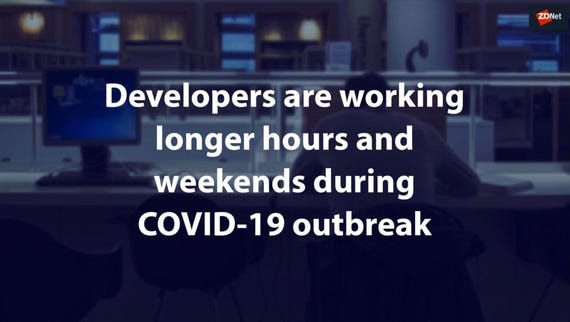 Developers on the GitHub platform have been working longer hours and weekends as the COVID-19 pandemic continues to force organisations into remote work, according to GitHub.

Through an analysis of the work cadence data of 40,000 paid organisation accounts, the Microsoft-owned company revealed in a report that developers on the GitHub platform are working an additional 30 to 60 minutes per day since March.

The report, titled An analysis of developer productivity, work cadence, and collaboration in the early days of COVID-19, also revealed that more developers have extended their work hours into the weekend during the pandemic. They are also not merely stretching their workdays longer while performing the same volume of work, but rather, users are consistently increasing their work volume compared to the same period last year.

Nicole Forsgren, GitHub vice president of research and strategy, told ZDNet that the time to merge pull requests in the last half of March was two and half to four hours faster compared to the same period last year.

"Developers may be feeling pressure to push more often, and thereby showing this increased work volume in the data due to several factors: Economic uncertainty and the desire to do well and stay employed, using work as a distraction to combat boredom when stuck at home, pressure from management to get products to market, or team norms to push frequently to maintain fast and stable software delivery cadences," GitHub wrote in the report.

In the Asia Pacific region, some GitHub users have seen an increase in productivity when shifting to remote work due to noticing certain redundancies in their face-to-face engagements, said GitHub vice president of APAC sales Sam Hunt.

"What's become apparent to customers .. is they actually had meetings that were not necessarily producing any outcomes but the minute they moved to virtual, the information was shared collaboratively as it was needed, they were getting much faster outcomes to their developer lifecycle," Hunt said.

Prior to the COVID-19 pandemic, however, the same type of cadence work data indicated that the time to merge pull requests in January 2020 took four to five hours longer year on year for repositories owned by Enterprise Cloud accounts, and approximately one hour longer than last year for repositories owned by paid team accounts. GitHub said it did not have an explanation for this decrease.

ZDNet asked whether this slowdown in developer efficiency was a trend, but GitHub said it did not have this data for previous years.

While Forsgren noted the improved productivity of developers since COVID-19, she cautioned that organisations needed to keep an eye out for burnout. To mitigate potential burnout, she said organisations could take proactive measures such as creating a culture that allows for recovery and making smart technological investments.

On the smart technological investment front, she suggested that organisations could improve their: integration and delivery processes, where they have fast and clear feedback to developers; work automation process around work tickets; burndown processes for tickets and tests; test automation, as the inability to find errors in a process early, a reliance on manual work, or flaky or unreliable tests can result in a build-up later in the process and in systems; as well as implement a clear change approval process so developers can focus on their work.

Outside of pull requests, the report found that developer activity remained consistent in spite of COVID-19, except in the area of issue creation.

In February, issue creation activity in repositories owned by Enterprise Cloud accounts decreased sharply, which corresponded to the time period when Asia and Europe were hit by COVID-19, and North America's West Coast began shifting to working from home.

By late February and early March, issue creation rates for these accounts returned to similar levels in comparison to last year's levels of activity.

Meanwhile, free user and paid team accounts were largely unaffected, which GitHub largely attributed to hobbies not usually requiring "the trouble of doing planning (or at least not logging it in an issue -- we may just put it on a sticky note".

"There is also much less planning required by users of team accounts, especially when compared to enterprise accounts … teams are much more likely to coordinate -- and be able to coordinate -- with non-tech and ad hoc methods, while enterprises simply cannot keep track of complex, often-tiered development efforts without coordinated tracking tools," Forsgren added.

Last month, GitHub released a new, free tier for developers that want to use the code repository for private development. With GitHub Free, developers can access all of GitHub's core features, and an unlimited number of collaborators can access private repositories.

Shortly after the announcement, GitHub developers worldwide were hit with service degradations, resulting in them being unable to perform basic programming tasks.

Join Discussion for: Developers are working longer hours and weekends...