Full Bio
on November 30, 2018 | Topic: Cyberwar and the Future of Cybersecurity 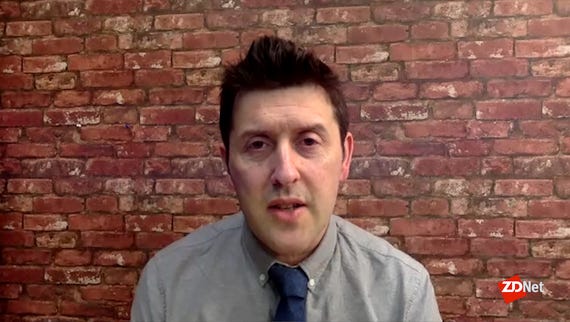 The internet is as convenient, exciting and lucrative, as it is dangerous and dark. The web has evolved through the years and so too have the criminals that are out to harm others. Steve Ranger, UK editor-in-chief of ZDNet and TechRepublic, has covered the evolving cybercrime and cyberwar landscape for years and written several cover stories on the subject. Steve shared his insights with us in an interview as part of ZDNet's Special Feature: Cyberwar and the Future of Cybersecurity. The following is an edited transcript of the interview.

Karen Roby: All right, to start off with here, talk about the world of online crime. How has it evolved in general?

We have always different criminal groups out there from hacktivists to lone wolves who just want to break things right through to organized crime and even increasingly at the moment state-sponsored hackers who are going out and systematically breaking things.

Karen Roby: And they're scary obviously. Steve, when you talk about the groups, the organized crime, some of them working together as you mentioned, you've got lone wolves as well, as large groups everyone playing their own particular role. Talk a little bit about how they interact, how they go about their business.

Steve Ranger: Sure. What's quite interesting is there's this kind of overlapping ecosystem. You have, right at the bottom you have what we call disorganized crime, disorganized cyber criminals which might be individuals or groups of one or two or three, small groups, and they might be doing anything really from frauds to hacking to writing viruses to writing ransomware or to buying ransomware from larger organized groups or maybe someone on the dark web and then reselling it, or just trying to make a bit of money here and there doing scams.

Then you have organized crime. Organized crime on the internet now is a seriously big business. You have these kind of federated organizations where you have a kind of cybercrime boss, and then you'll have, he or she will connect up different groups with different specialties to run really big frauds, make a bunch of money.

Then above them you might have state-backed hackers. We've seen a lot of that recently involved with cyber espionage or probing military systems, looking for holes that can be exploited at a different date.

Karen Roby: Okay. And when you mentioned, you talked so much about how we are hearing so much about the state backed groups and the criminals there. How big of a threat is that?

Steve Ranger: I think it's hard to calculate the threat. To the average person is pretty unlikely that a state-backed hacker is going to come after you, unless you're a really high-value target. To the average person it's quite a rare kind of a risk. Obviously if you are, I don't know, working in aerospace or biotech or robotics, one of those kind of companies, then there's a reason or chance that someone's going to try and hack your systems to steal your intellectual property or just cause trouble.

In terms of the bigger risk, so clearly down the line there's a lot of worry about cyber warfare that hackers could actually break into things like power systems or banks and cause chaos that way. That's clearly a huge risk, but the likelihood is very low.

What's going to happen day to day is you're more likely to run into a scammer or maybe get ransomware on your PC or something like that. Those are the kind of the everyday risks, which are incredibly annoying and a real problem if suddenly your PC is encrypted and you can't get to your family photos or your work you're doing. Those are kind of everyday risks.

Right at the other end of the scale there's this fear of cyberwarfare and state-sponsored crime. That's much less likely, but clearly really, really dangerous if it actually does happen.

Karen Roby: Right, both ends of the scale are scary for everyone. And when it comes to protecting ourselves Steve, what is it that you recommend?

Steve Ranger: Well, some of the real basics can save you here. If you make yourself a slightly more difficult target to go after, chances are the kind of the small fry will go somewhere else. That means making sure that you don't have default passwords, making sure that you do your update, making sure that if you can use it then you do have two-factor authentication, all those kind of really obvious things, being careful about what you click on an email.

From the most basic to the most incredibly complicated attacks, nearly all of them start with a phishing email where someone sent you an email that you think is from a coworker or a friend or it says you've won the lottery or you won a prize. You click on that and you can be in a lot of trouble. Basically the common sense approach is going to save you from a whole lot of pain.

At the other end of the scale, if you are being targeted by state-sponsored hackers, well, you've got to work a lot harder. You've got to, you've kind of almost expect that they will in some way get into your systems, and then try and work out how to reduce the damage. Again, that's really only for a very small sector of people. Those people probably realize too they are already, but for the average person who isn't necessarily a target for an intelligence agency, just doing the obvious stuff will make you so much of a harder target to go after that mostly they will go elsewhere.

Karen Roby: All right. Steve, as I mentioned there at the beginning, of course the web has opened up just such a whole new world to all of us really and is so exciting and so lucrative in so many ways and connects people together from all over the world. It's evolving, but the criminals are evolving too, and that's I guess the thing, we all need to kind of stay on our toes.

Steve Ranger: Yeah, absolutely. I mean, there's loads of amazing stuff on the web. You shouldn't be scared of using it, but you should use some sort of basic common sense, basic security hygiene to keep yourself safe.

Cybercrime and cyberwar: A spotter's guide to the groups that are out to get you
From disorganised crime to state-backed hackers these groups can make the internet a dangerous place. Here's a guide to the major menaces to avoid.

Governments and nation states are now officially training for cyberwarfare: An inside look
Europe, Canada, USA, Australia, and others are now running training exercises to prepare for the outbreak of cyberwar. Locked Shields is the largest simulation and TechRepublic takes you inside.

Understanding the military buildup of offensive cyber weapons
Over the past few years, offensive cyberweapons have risen in prominence as a part of international military efforts. The full impact of these weapons remains to be seen, however.

Cybercrime Inc: How hacking gangs are modeling themselves on big business
Over the past few years, offensive cyberweapons have risen in prominence as a part of international military efforts. The full impact of these weapons remains to be seen, however.

Why ransomware is exploding, and how your company can protect itself
Ransomware attacks on businesses grew exponentially in the past year. Here's what you need to know and how you can prepare.

Cyberwar predictions for 2019: The stakes have been raised
Cybersecurity will define many of the international conflicts of the future. Here's an overview of the current threat landscape, UK and US policy in this area, and some expert predictions for the coming year.