SynTouch, a California company working to give robots a human-like sense of touch, was recently awarded $2.5M in grants from the National Science Foundation and the Office of Congressionally Directed Medical Research Programs.

So what's special about human touch?

Consider what happens when you throw snowballs at your kid for a few minutes or try to scrape ice off a car windshield without wearing gloves. Your hands go numb and it becomes very difficult to perform fine motor tasks, such as zipping up your jacket or getting your keys in the ignition.

Those scenarios are so familiar they may not strike you as noteworthy, but numb hands are a real head scratcher for roboticists. In the above cases, your hands haven't lost any of their mechanical abilities. Your muscles still work as they always have and the joints open and close freely. What's changed is your sense of touch. You can no longer feel pressure, texture, heat or a number of other properties that we unconsciously rely on for fine manipulation. Your beautifully capable hands are reduced to clunky manipulators.

Which is exactly how robots feel (pun intended). Deprived of the full tactile sensing capabilities of the human hand, which is arguably the most nuanced manipulator in the world, even mechanically sophisticated robotic end effectors are cludgy and ... well, robotic.

"Classically, pressure sensing has been performed with a strain gauge, which is an electronic element that deforms slightly when force is applied," says Matt Borzage, founding partner of SynTouch, during a recent phone chat. "If you have a digital bathroom scale, it uses a strain gauge to tell you how much you weigh."

Unlike a human finger, a simple strain gauge can only measure force in one dimension. Engineers have tried putting a few of them together in different orientations to make a more complex sensor, but that yields a fragile device that still doesn't work the way a human finger does.

For example, the best strain gauge still won't sense where the precise point of contact with an object is. It also can't measure texture or physical properties like squishiness, essential data for a robot when it's not sure whether it's reaching for a sponge or a brick.

"We've spent a lot of time looking at hands," says Borzage. "Not just sensing, but combining sensing with the right form factor to allow robotics fingertips to do useful things."

The result, according to SynTouch, is "the only sensor technology in the world that endows robots with the ability to replicate -- and sometimes exceed -- the human sense of touch."

SynTouch's BioTac sensor consists of an elastic skin over an epoxy core, where the electronics are located. Between the skin and the epoxy core is a layer of fluid. Electrodes on the surface of the core come into contact with the fluid, and when an object is grasped, the system maps the resulting electronic signals.

But human fingertips also sense texture. "To tackle that," says Borzage, "we borrowed from the world of acoustic measurement." When you rub your finger over the surface of an object, your skin will vibrate slightly. "The same thing happens in our sensor. In our case, those vibrations pass through the fluid underneath the skin. We measure those, which allows us to extract information about texture."

The BioTac sensor also uses temperature the way the human finger does. A small heating element elevate's the temperature of the BioTac above room temperature. An embedded sensor called a thermistor is able to measure any change in temperature that occurs when the finger tip comes into contact with an object. That allows a robot to get a sense of what the object is made of. Metal is a better thermal conductor than polyester, for example, so more heat will flow out of the finger when it's touching a stapler than when it's gripping the back of an upholstered chair. That information is crucial to figuring out a grasping strategy.

What's most interesting about the BioTac is that the underlying technology is not groundbreaking -- much of it has been around for years, which means it is both robust and time-tested. Because the electronics are concealed deep within the core of the sensor, the device itself is robust enough to handle real-world grasping applications, a shortcoming of many tactile sensors.

The National Institutes of Health see real potential for SynTouch's technology in prosthetic hands. Much of the recent grant money will be directed toward research that may one day result in bionic limbs endowed with a truly human-like sense of touch -- and the dexterity that goes with it. 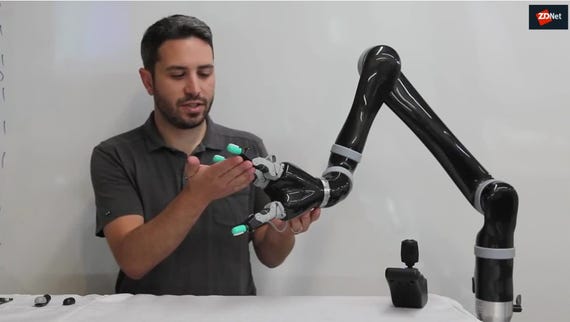 Join Discussion for: Do robots need a human-like sense of touch?