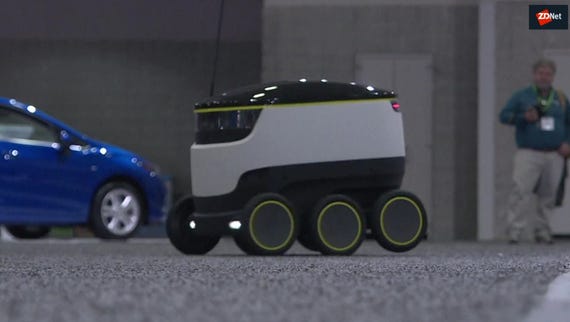 Domino's has announced that its autonomous delivery vehicle is now operating commercially, delivering pizzas to customers in Hamburg, Germany.

The robot delivery system was created in partnership with Starship Technologies, a European startup founded by two of Skype's co-creators Ahti Heinla and Janus Friis in 2014.

The robots travel on six wheels, navigating through streets and around small obstacles with the help of their on-board sensors, which can detect the shortest route to a destination and adapt their speed to pedestrians around them. The robots can travel up to 16 kilometres per hour.

This isn't the pizza giant's first foray using the latest technology to deliver pizzas; Domino's also delivered a pizza in New Zealand via drone in partnership with Australian drone startup Flirtey. The pizza was in transit for less than five minutes, arriving hot to the customer.

Domino's chief digital officer Michael Gillespie revealed earlier this year that the pizza giant is currently working on the logistics behind getting DRU Drone by Flirtey capable of delivering more pizzas, as well as how to transport difficult-to-carry drinks and sides that often require different temperature environments.

Building on DRU Assist, Domino's also announced DRU 3rd Party, an artificial intelligence system that will use third-party AI platforms such as Amazon Echo and Google Echo, and will allow people to order pizza from smart devices.

"In 2017, Domino's is going from mobile first to AI first. That means that from this year onwards we will be developing nearly all of our platforms with an insight to engaging with AI and machine learning first as we adapt to all the different devices in society," Meij said in March.

Meij explained the shift to "AI first" forms part of Domino's vision for the "Internet of Food", which centres on making it as easy as possible for customers to order and pay for their meals online.