Easy Peasy was one of the first derivatives of the Ubuntu Netbook Remix, originally targeted specifically at the ASUS Eee PC line of netbooks. It has now widened its horizons, and bills itself as an "Open Source Netbook OS", so they are aiming across the entire netbook market segment.
Written by J.A. Watson, Contributor on May 4, 2010

Easy Peasy was one of the first derivatives of the Ubuntu Netbook Remix, originally targeted specifically at the ASUS Eee PC line of netbooks. It has now widened its horizons, and bills itself as an "Open Source Netbook OS", so they are aiming across the entire netbook market segment. I happen to still have an original ASUS EeePC 701 (with 4GB SSD), so I decided to give Easy Peasy a shot on that. I had previously loaded the Release Candidate for Ubuntu Netbook Edition 10.04, so I didn't expect to have any significant problems, and I didn't. I was a bit curious about the timing of the Easy Peasy 1.6 release, though, because it seemed to me that it actually preceded the final Ubuntu Lucid release by a couple of days.

I did the usual download of the ISO and then convert to a Live USB stick, using the Ubuntu Startup Disk Creator. (It's rather convenient that the Ubuntu utility still works on derivatives such as Easy Peasy and Linux Mint. I assume the same is true of others.) I've saved a lot of CDs and a lot of time using Live USB sticks... hmmm, if we used to say that we were "saving trees" when we used less paper, what are we saving when we use less CD/DVD media? Artificial Christmas Trees?

Insert the Live USB stick, turn on the EeePC, hit escape, and choose the USB boot. The first screens come up, and you see the first major difference from Ubuntu - no Putrid Purple (oh, sorry, Awful Aubergine), it has pleasant shades of green for the desktop. The installation procedure is identical to the Ubuntu Lucid procedure, as far as I can tell. However, once I hit "Install" on the final screen, the installer window disappeared, and I was left with just the basic desktop while it did the installation. Maybe I did something wrong, because I was distracted at the time, but if I hadn't been able to see the LED blinking in the USB stick, and the disk light blinking on the EeePC, I might have thought the installation had crashed instead of running. Anyway, after five minutes or so, the installation was complete and it was ready to reboot.

The basic desktop is basically the same as the Ubuntu Netbook Edition, with a few small changes: 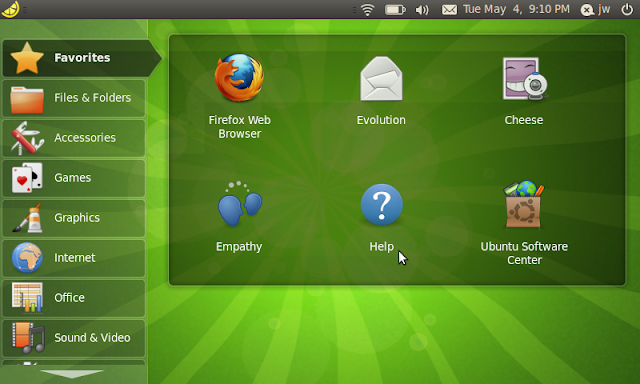 Because of the small size (7") and low resolution (800x480) of the display, the menu on the left side of the screen has to scroll vertically, but that seems to work just fine. The rest of the screen layout, menus and programs are very similar to the standard Ubuntu Netbook Edition distribution.

When an application is started, the window is immediately Maximized, as you would expect. 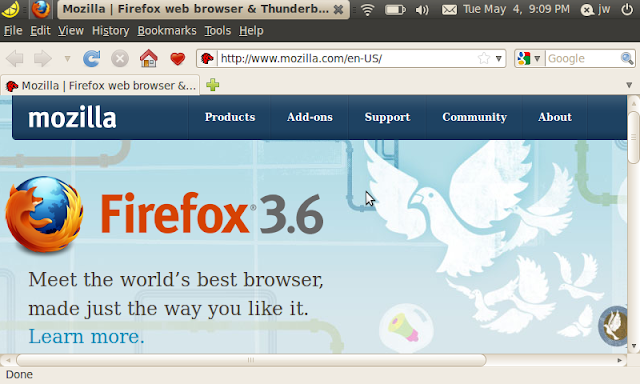 Note, as usual for UNE, the application icon has been added to the panel at the top left of the screen.

All of the hardware on the EeePC seemed to work, including the keyboard, touchpad, wired and wireless networking, camera, speakers and SD Flash Card reader. I noted in a much earlier blog about the EeePC that you may need to go into the BIOS setup and enable the camera, as it is disabled by default, but this is the same unit that I used at that time, so it was already done. Opening a second window, cheese in this case to show the functioning camera, again Maximizes so that it overlays the original window. 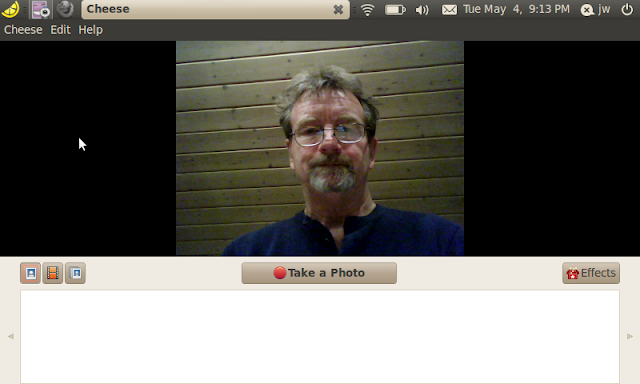 Finally, just to clean up something that a couple of people mentioned to me after my previous post about Ubuntu distributions, it is of course also possible to have multiple windows open on the desktop simultaneously. All you have to do is right-click on the application icon at the top left of the screen, and choose Unmaximize for each of the windows you want to see, and then arrange them as you wish. That latter part can be a pretty good trick at 800x480 resolution, but I think you'll get the idea from this: 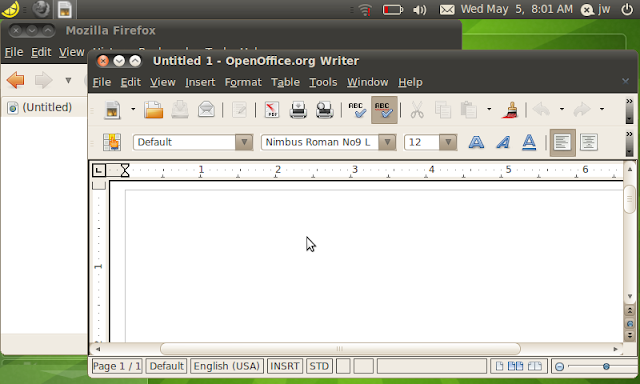 You will also notice from this screen shot that EasyPeasy has inherited the relocated window buttons from Ubuntu Lucid, for better or for worse...

My overall impression of Easy Peasy has been very good. It installed quickly and easily on a very old netbook, it left me about 1 GB of free space out of a 4 GB disk, and it seemed to work flawlessly. The combination of EasyPeasy and the original EeePC reminded me of what netbooks were really all about when they first appeared. While 1 GB of space is not a lot, it would be easy enough to put a 4, 8, 16 or whatever GB card in the SD slot for your own documents, files, photos and such. If you still have one of these laying around somewhere, it might pay you to dig it out, load a very nice modern Linux distribution on it, and use it as a very small, very light, very portable netbook.

In need of a new Chromebook? Here are 13 deals you can't pass up