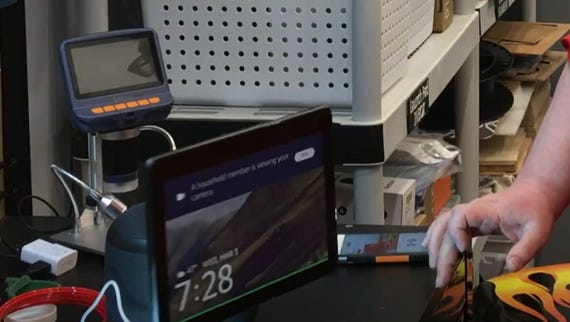 Testing the motion capabilities of the Echo Show 10
Watch Now

Amazon's all new Echo Show 10 arrived today. Even with only a few hours to test it out, I have some first impressions to share. I'll be back with more comprehensive coverage once I've had a few weeks to use it.

Also: Best Alexa device to buy in 2021: Pick the best Echo for you

Let's cover the basics first. This is the latest Echo Show. Like all of the Echo Show devices, it pairs the Alexa voice assistant with a screen, but it has some cool new features which I'll show you today. Our existing fleet of Echo devices already included an original 2017 Echo Show (with a 7-inch screen), and the second generation Echo Show 8 (with an 8-inch screen). One lives in the kitchen, and one lives in our laundry room.

To be fair, we don't use the two Shows to their full potential. We rarely use the cameras. We watch the little news videos presented by the Show interface. But mostly we use them for lists, timers, and music playback.

When Amazon first announced, and then offered to send me an Echo Show 10, I was intrigued. The motion follow feature was a big draw. Basically, in addition to having a bigger display (but still with the same 1280x800 resolution as the 2018 Echo Show 8), the new Echo Show's screen rotates on a central hub.

It looks very much like the unacknowledged love child of the first flat-panel iMacs from the early 2000s. Except unlike those old iMacs, this device actually has a motor in that central hub chassis. The screen follows you. I'm intrigued by the possibilities of that, but tinkering will have to wait until I've had more time with the device.

If you read the reviews on Amazon, one minor design decision has deeply offended a lot of purchasers. The power cord and power dongle are white, even if you buy the Charcoal black unit. Now, I don't care (although I did try on behalf of our readers -- with no success -- to plug an older, black Alexa cord into the unit). But if you firmly support the aesthetic that the color of the device and the dongle should match, this might upset you, too.

Since the real standout feature of this incarnation of Alexa is motion, that's where I put the limited time I've had since it arrived. The video above  takes a very quick look at the motion capabilities of the Echo Show. It's a very early introduction. The device only arrived at my door two or three hours before I set it up, and started recording the video.

One of the things I want to point out is that the screen does move. It'll go left and right. In fact, it has almost a 360 degree movement. But you can't remotely change the tilt angle.

The other thing is that the tilt can be manually adjusted to point up, but you can't make it point down. The closest you'll get the screen to point towards the floor is vertical. So if you want to put it up on something and be able to look down, like if you want to put it up on a shelf and watch your living room and see where your dog is on the floor, that won't really work because the whole mechanism is weighted. So, if you tried to physically tilt it and lean it on something, you might unbalance it and it might fall or be unable to rotate properly.

In the attached video, I am watching another YouTube video of myself (so meta!). As I move, the Echo Show is moving with me as I watch. You can move around a room and still see the screen. That's a great application for watching instructional videos. It's also, possibly, a strong application for video conferencing -- although I don't know how it will react to multiple people in the same room. If you and the kids are all trying to talk to grandma from different places in the room, it's not clear how the device will handle it. Stay tuned.

The Show's motion tracking isn't precisely real-time. It takes a small amount of time to catch up, so if you're moving really quickly, it won't go quite as fast as you do. So far, it's never completely lost me. It only takes a second or so to reorient itself. Also, the camera is off-center (it's on the upper right of the screen). The Show seems to center the person's face on the camera, not on the middle of the screen. It seems like a minor complaint, but in a person-to-person video conference, it might be annoying.

In the video, I'm recording in the FabLab. One exciting application of this new Show, at least for me, is the ability to monitor the output condition of my 3D printers. I connected through the mobile app, which lets you swipe left and right to move the camera on the Show.

The moving camera is great for certain other applications as well. If you're checking on a pet, and you're willing to place the Show close enough to the floor to see the animal, it would be helpful (provided the pet doesn't think it's a toy).

Likewise, if you're looking in on an elderly person remotely, this might be a boon -- but only if you have the elder's permission. I think this would be a great technology to facilitate spending time with a home-bound senior citizen because, as long as each of you has an Echo Show 10, you could see each other as you each move around your respective spaces.

It would also be great for a quick health and wellbeing check. Are they mobile? Are they up? Have you seen them moving around? Did the nurse arrive yet? That kind of thing. There are a lot of issues with regard to elder privacy, but if everybody signs off on the idea, it could be a big win. I speak from experience caring for my parents. Had this been around when they got sick, it would have provided peace of mind.

For those who might be a little freaked out by the spying potential of this device, Amazon has built in two solid protections. First, there's a little slider switch on the top of the screen that physically blocks the camera (but not the mic). Second, when a remote viewing connection is established, a big notice always shows up on the screen.

I'm pretty impressed with the motion capabilities of this device. I'm not entirely sure what all the use cases are yet, but we've looked at a few already. I really, really want an Alexa Skill that turns this into a recording camera that I can use in the workshop. I love the idea of the camera following me while I'm talking -- and if I could easily turn that into a video, it would be very cool.

Oh, one other thing: one of the first reviewers on Amazon's sales page for this device said you couldn't do remote monitoring without buying the $49/year Alexa Guard Plus service. I don't have that, and as far as I can tell, you just go into the Alexa app, choose Devices, then Cameras, and pick the Echo Show. Guard Plus adds notifications and alerts, but you don't need it just to use the Echo Show's remote camera pan feature.

Is the new Echo Show 10 with motion worth $249? Is the motion feature a gimmick, an intrusive reminder of the ever-encroaching Big Brother, or is it another must-have feature from the minds of Amazon's engineers? I don't know yet. I haven't even had this for a day. But let's sleep on it and let me know what you think in the comments below? Does it scare you? Does it intrigue you? Do you see immediate applications? Share below.

Join Discussion for: Echo Show 10 with motion: How it feels to...