The United States Department of State (often referred to as the State Department), is responsible for the international relations of the United States and equivalent to the foreign ministries of other countries. The Department was created in 1789 and was the first executive department established.
Written by Oliver Marks, Contributor on Oct. 25, 2010

The United States Department of State (often referred to as the State Department), is responsible for the international relations of the United States and equivalent to the foreign ministries of other countries. The Department was created in 1789 and was the first executive department established.

Currently lead by Secretary of State Hillary Clinton, the department is the U.S. president’s principal means of conducting treaty negotiations and forging agreements with foreign countries, and is also responsible for the U.S. Mission to the United Nations, the Foreign Service Institute, and various offices of diplomatic security, foreign intelligence, policy analysis, international narcotics control, protocol, and passport services.

With those sorts of responsibilities you'd expect ultra tight security, and in many parts of the organization that's what you would find. When it comes to effectively sharing mission critical information however, need-to-know cold war culture was exposed as inadequate at the end of the last century by the East Africa embassy bombings, and then by the various events around 9/11.

Where diplomatic corp employees had previously been selected for risk aversion and trained to expect to need to obtain clearance and authorization before transmitting official information internally, it became clear that more efficient ways of working behind their global firewall were needed.

The Department of State’s Bureau of Information Resource Management’s 'Office of eDiplomacy' was therefore set up eight years ago by Colin Powell in order to move the state department from a cold war 'need to know' mentality to a post 9/11 'need to share' perspective, and the environment has since blossomed into a powerful online collaborative environment that serves around sixty thousand people worldwide.

I caught up with Richard Boly, Director of the Office of eDiplomacy this summer at an nGenera Insights meeting and talked at length about the environment and their move from traditional diplomatic channels to twenty first century statecraft.

A significant percentage of state department employees are foreign nationals working at consulates and embassies around the world, and some of these locally employed staff have never been to the USA. Foreign Services Officers typically rotate every 1, 2 or 3 years, so capturing pertinent information for successors is increasingly important. 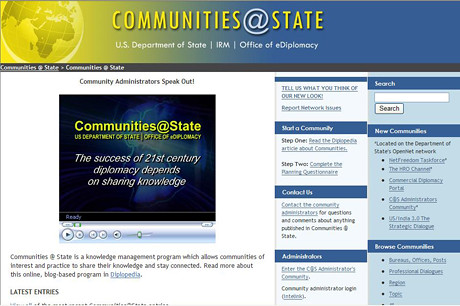 Capturing information about cross region commonalities can also take the form of putting up questions to receive answers from all over the world, a much broader community than local peers. Some embassies also have vertical communities on specific topics -Japanese economics for example.

In keeping with the Government 2.0 ethos, the eDiplomacy environment works by the principle that if you care about open governments, transparency starts at home before you get to be transparent with the world, so practice what you preach locally.

Currently comprised of nearly eighty self forming and defining communities of interest or practice grouped into classified and unclassified content spaces, the environment provides clear guidance around the classification status of all material. (Not surprisingly there's less conversation within classified areas).

Diplopedia, the State department's internal wikipedia and a key body of knowledge, now has over 12 thousand articles, 35 hundred contributors and over 45 thousand page views a week and growing. Imagine being a Foreign Service officer in your first tour in Washington, D.C, serving as the desk officer for a small country, and having to read up on local culture and diplomatic procedures. 'Deskipedia' is an aggregation of 'how to' articles so when something big happens, such as a head of state visiting, you can look up appropriate protocols and organizational practicalities. Updating the information to reflect findings and experiences is of course part of the power of this type of collaboration.

The entire interface of the Mongolia mission in Ulaanbaatar is in one of eDiplomacy’s communities, and everyone in us government can read it - the objective is to keep information out of email messages and in a centralized discoverable, searchable, location. 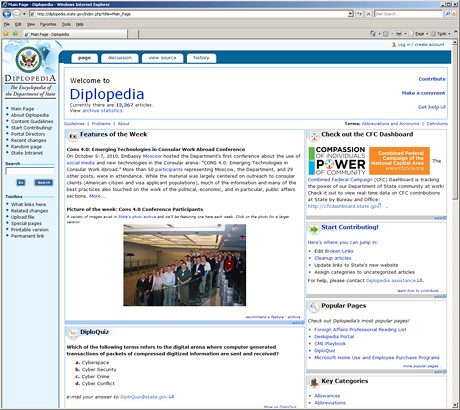 A goal of centralizing information with everyone the curator to provide lots of context is working very well and political rivalries, so often a debilitating thorn in the side of enterprise collaboration, is not an issue. The strength of the eDiplomacy environment has made it much easier for the state department to interact within external social media and networks externally because of their internal training wheels.

The environment is expanding and evolving: 18 months ago Secretary Clinton requested an open Ideation forum to empower diplomacy: the subsequent “Secretary’s Sounding Board” quickly hit 1600 ideas & 14 thousand comments with 27 thousand page views a month; global 'watercooler' conversations became more widely visible, and originators of ideas are meeting each other.

While there's plenty of cross pollination for consistency of thinking, there are also lots of vertical spaces such as communities about culture and language use. 'Dr. Hamza's Home Page' is a place for employees to share Arabic language experiences and challenges, and the administrator helps community participants to build skills and enhance proficiency in Arabic. This community is especially helpful in enabling employees to retain their language skills even when they're not in an Arabic-speaking country.

Despite such a robust and enduring environment, the environment is bootstrapped, with everything built on open source on lean budgeting, and runs across pre existing intelligence extranets and firewalls.

The mobilization of global technology volunteers after the recent earthquake disaster in Haiti is a good example of successful, rapid leverage of the environment to address urgent needs. Using geotagged, open street maps and Frontline SMS mobile technology to inform people on the ground, with constant updates on the fly. 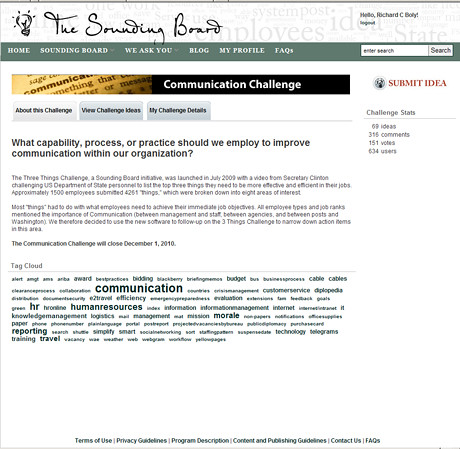 80 thousand actionable items were identified to triage aid and support on the ground, while tracking and provisioning needs. Synchronization both within and outside the firewall for efficient collaboration was highly successful and added a dynamic, real time dimension to the existing body of knowledge.

While collaboration, social networking/social media marketing are hugely fashionable right now in technology and business circles, attracting significant venture capital and associated hype and vendor over promise, eDiplomacy is a great example of an environment crafted to serve, connect and inform a complex community over time.

Richard Boly will be keynoting the November US Santa Clara Enterprise 2.0 Conference, where he will provide further insight into this global environment, which has many parallels to some of the needs of corporate collaboration.