Stephen Elop will be stepping aside from his role as Nokia's president and CEO, and returning to the Redmond giant in a new role, under Microsoft's acquisition bid .

Following today's announcement of the deal, he will become executive vice president of devices and services at Nokia, and report directly to Microsoft chief Steve Ballmer.

Elop will run an expanded devices team which will also include all of Microsoft's current Devices and Studios work and most of the teams coming over from Nokia.

According to Ballmer's e-mail note to staff, Julie Larson-Green will continue to run the Devices and Studios team, and will be focused on the big launches this fall including Xbox One and Surface enhancements. She will join his team once the acquisition closes. 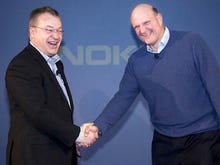 Microsoft-Nokia deal: 11 quick facts Microsoft's bid to buy Nokia came late on Monday. Despite rumors to that effect over the past year since Nokia's financial troubles began, few expected the deal to go ahead quite like this. We explore what's going down, with whom, and when.

"There are no significant plans to shift where work is done in the world as we integrate, so we expect the Nokia teams to stay largely in place, geographically," said Ballmer in the note.

In the meantime, Risto Siilasmaa, chairman of the Nokia Board of Directors will take on the role as Nokia Interim CEO. If the deal goes through, Nokia will retain NSN, HERE, its CTO Office and its patent portfolio.

The latest news pushes Elop higher up the shortlist as a candidate to take over as Microsoft CEO following Ballmer's plans to retire in 12 months' time .

Elop was a former Microsoft executive who joined the Finnish phone maker in 2010. There has been much speculation and conspiracy theories that Elop was a "trojan horse", especially following the Nokia Microsoft phone tie-up in 2011.